When the second-generation Echo Dot launched in the UK it had very little in the way of competition. Having everything that was good about Amazon’s Alexa voice assistant squeezed into a smaller package half the price of the bigger Echo, it was a no-brainer.

But now the Echo Dot has some stiff competition from Google, in the form of the £50 Home Mini and its Assistant, and Amazon’s own second-generation Echo, which is now only £79.99.

The new Echo Dot on the right is slightly larger in every dimension than the previous version on the left.

The Echo Dot is Amazon’s small, puck-like smart speaker with the firm’s Alexa voice assistant built in. New for the third generation is a softer, more rounded aesthetic with fabric sides. It is also slightly larger in all directions, measuring 99mm in diameter and 43mm tall.

At the back is a circular power socket, replacing the microUSB socket of the old Dot, and a standard 3.5mm analogue socket for connecting to a stereo. On top you have the volume buttons, action button and the microphone mute button.

You can also use Bluetooth to stream from the Dot to other speakers or from your phone or other device to the Dot to use it as Bluetooth speaker. 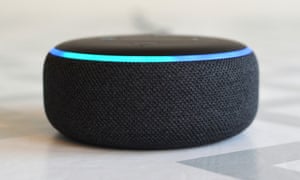 The speaker now projects out through the fabric sides of the new Dot, making it more capable of filling a room with music.

The updated design is joined by an improved speaker. The sound is fired out from the fabric sides of the new Dot, instead of the plastic top of the old model, projecting sound further into the room making it much better for music.

The quality of the speaker has also been upgraded. It won’t beat larger speakers, but for the money it sounds pretty good, edging out Google’s Home Mini. The mids are punchy, the highs relatively crisp and while there’s no real bass to speak of, the new Dot sounds relatively rounded for a small speaker.

Feed it guitars and vocals from something like the live version of Hotel California by the Eagles from Hell Freezes Over and you’re greeted with a warm, inviting tone. Classical tracks such as Jupiter from Holst’s the Planets sound fairly rounded too. The Dot struggles with bass-driven electronica, but coped better than expected with Dr Dre’s Still D.R.E. despite its pumping bassline.

The Dot can also get pretty loud, although not quite as loud as Google’s Home Mini, and the audio starts to distort in high-energy tracks at maximum volume. 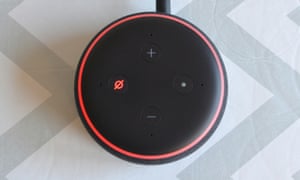 Press the mute button on the top of the Dot and see both the button light up and the light ring turn red so you know the microphones are disconnected.

With smart speakers, the hardware you buy is only half the story: they live or die by the capability of the voice assistant within them.

The Dot’s Alexa performance is first rate, with its four-microphone array being able to hear you over things like the cooker hood going full pelt in the kitchen or when playing music at maximum volume even if you do have to shout a bit. Alexa also sounds good through the Dot’s speakers.

But where Alexa was the only game in town, it’s now a two-horse race between Alexa and Google Assistant. For most things Alexa and Assistant are on a level playing field, particularly if you’re not entirely integrated into Google’s ecosystem already.

How do I get the best from Alexa?

Alexa has a lot of third-party “skills” (apps), including those from news publishers such as the Guardian, games such as Escape the Room, utilities such as National Rail app and silly things such Star Trek – Red Alert, so you can pretend you’re on the starship Enterprise.

You can change Alexa’s wake word too, which is the word it listens out for when dormant before activating. “Alexa” is the default, but options include Echo, Computer or Amazon - helpful if you have anyone called Alex in your house and want to avoid accidental activations of either the Dot or the human.

Where Google’s Assistant has the edge is in interpreting speech when you mess up your questions, or when you issue multiple commands at once such as “turn off the Christmas tree and the living room lights”. Google can also answer a greater range of questions than Alexa. 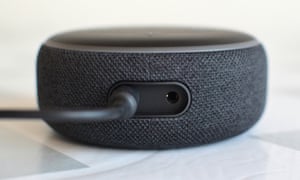 The back of the new Dot has a new round power port for the included 15W charger, but still has the 3.5mm analogue output.

The Amazon Echo Dot (third generation) is available in black, grey or white costing £29.99, although supply constraints mean you might need to shop around.

The new Echo Dot is a slight improvement over the old one in every way. It’s more attractive, sounds better, hears you just as well, still has a 3.5mm socket and Bluetooth audio in and out.

It isn’t a patch on the larger Echo speakers, which are almost twice the price, but just about beats its closest rival, the Google Home Mini, on sound and connectivity.

At £50, or frequently £30 on deals, you get a lot of smart speaker for the money with the Echo Dot. But where the original Echo Dot was a no-brainer, the decision now comes down to whether you want Alexa or Google Assistant in your tiny smart speaker, which is a much tougher call to make.