Dyson’s 360 Eye robot vacuum cleaner is available in the UK after an extensive trial in Japan and it claims to be the best available.

How does it stack up against the market leading Roomba – and is it really worth buying? 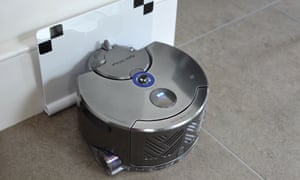 The dock is a simple, white panel with a chrome contact-covered foot onto which the robot drives to charge itself up.

The 360 Eye is both smaller and taller than most other robot vacuums. It’s 23cm in diameter, which is 12cm less than its biggest competitor, the iRobot Roomba 900 series, but it’s also 12cm tall, which makes it 3cm taller than the Roomba.

Docked, as it spends most of its time, the 360 Eye takes up significantly less floor space than wider competitors, which makes it easier to live with, and its smaller diameter means it can also get into and out of tighter gaps. For instance, the 360 Eye can weave in and out of table and chair legs better than competitors so you don’t have to stack chairs on top of tables on scheduled-clean mornings. 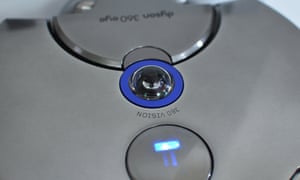 The eye sits proud of the top to give it a 360-degree view of its environment, but it cannot see things that are shorter than the robot’s body.

The top of the robot has a 360-degree camera, which it uses to map out your room each time and plot the best, most efficient cleaning path. The footage captured by the robot never leaves the robot.

The dock is a simple white stand with chrome strips on to which the robot drives to charge. Two black and white checkered squares help the robot see the dock and come back to it when it needs a top up, which it will do mid-clean if its doing more than one room. Excess cable can be stored in the power adapter, keeping it from getting sucked up by the robot. 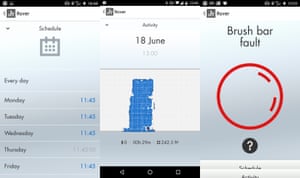 The Dyson Link app for Android and iOS allows remote control, scheduling and diagnosis of faults, in an easy-to-use manner.

The 360 Eye is one of Dyson’s first line of connected products, along with the Dyson Cool Link, while means most of its settings and controls have been offloaded to the Dyson Link app for Android and iOS devices.

You can still set the robot cleaning using the single button on the top, but to schedule cleaning times you need the app. Once installed and connected to your Wi-Fi network – it took three attempts to connect it properly to my (admittedly quite complex) multi-network set up – the app can control the robot from anywhere, not just in the home.

Scheduling is as easy as tapping every day, or picking a time and day of the week and setting it to repeat, or not. The app can then notify you ahead of a scheduled clean and once the robot has finished. It also shows you a map of where the robot has been so you can interrogate how throughly it has covered the available floor space, which is reassuring.

There’s a solid product guide built into the app that runs through the features, which bit does what, maintenance and troubleshooting. There is also an option to have Dyson come round to your house and install it for you. 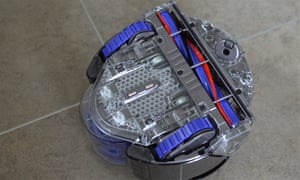 The brush bar covers the complete width of the robot, while caterpillar tracks give it a bit more traction than wheels.

There’s no doubt the Dyson 360 Eye is the most thorough of vacuuming robots currently available. It’s full-width brush bar and solid suction picks up considerably more dirt and fine dust than a Roomba. Dyson claims its vision system is also much more efficient than less expensive bump-sensing models, that map a room by bumping into objects.

Its edge-cleaning performance is also better than most others that rely on spinning brushes at the side, but it won’t get everything. Like every other robot vacuum currently available, the 360 Eye is designed to do the bulk of the work, to clean every day and keep on top of the dirt build up. You will still need another vacuum to clean the stairs and the parts that the robot can’t reach.

Watching it clean can be frustrating. The 360 Eye follows a square spiral pattern in 5m squares. It cleans until it is obstructed and then proceeds to fill in the square before moving onto the next square. If the space doesn’t allow, such as the length of galley kitchen for instance, it will switch to what looks like a more logical zig-zag pattern. 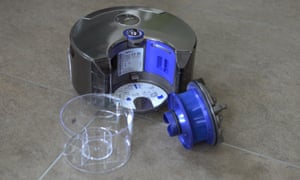 Taking the bin out and emptying it is quick and easy, but it is a small bin and you might have to empty it mid-run if you have particularly dirty carpet.

The robot has caterpillar tracks, rather than wheels, which helps it get over small humps such as thick rugs and small lips to doors. The vision system prevents the 360 Eye from crashing into large things and walls, but it still strikes chair legs and other thin or small objects.

The whole top of the body shifts as a buffer for impacts, which happens more than you might expect, but unlike many other bump-style cleaners, it doesn’t turn and rub itself against a surface and so won’t mark any delicate finishes or appliances you might have.

After about 45 minutes of cleaning the robot returns to its base station to charge, which takes just under 2 and a half hours. It will then go out and finish the bits that it didn’t reach once it’s charged. It turns off the suction and brush bar when it’s driving too and from the base station, and also while it pauses and works out ways around objects. 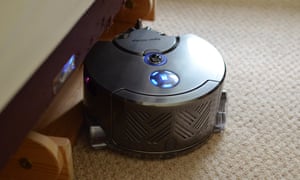 The robot is probably short enough to fit under an average bedstead.

The 360 Eye isn’t the quietest of vacuums and is loud enough to prevent you hearing the television if it starts cleaning near you, but it is also at a more pleasant pitch than most others. Dyson makes a big deal about how it tunes the sound of its vacuum cleaners to be more bearable and it really makes a difference. Normally you wouldn’t be in while it is doing the cleaning, however. 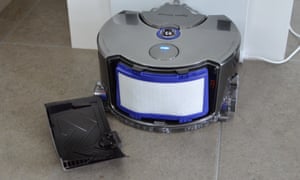 A pop-off panel on the back reveals the post-motor filter, while the pre-motor filter sits behind the bin.

While the 360 Eye will do the vacuuming and keep itself charged, there is a little bit of maintenance required. Once a month you have to wash the pre and post-motor filters, which are easy to detach - one at the back and one near the bin - run under a tap and let dry for 24 hours.

The 0.33L bin is very easy to empty. Just press the release button on top, pull it out, lift the lid and shake into the bin. A 30 second job at most.

Clearing obstructions from the brush bar is simple. It can be unscrewed and removed from the side, but I found I never actually needed to do that, even for shoe laces it had eaten. 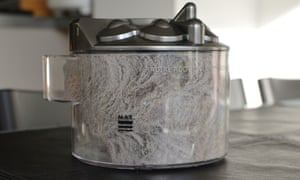 One cleaning run on a supposedly clean carpet.

The Dyson 360 Eye is the best performing robot vacuum available. It’s simply better at cleaning than all the others, but it also has its downsides. It can’t get under as many things as a Roomba, it still bumps into thin things and it still can’t clean everything, meaning it’s not the only vacuum you need to own.

Its smaller footprint makes a difference in its ability to get in and around table and chair legs, and it takes up less space when sat on its dock, which makes it a lot easier to live with in cramped flats and terraces.

Robot vacuum cleaners are designed to vacuum everyday or at least several times a week, which means that out-and-out cleaning power doesn’t matter as much. The regular cleaning never lets it get to particularly bad levels, and if you spill something you’re more likely to get out a vacuum then and there and clear it up rather than leave it for the robot.

You could therefore argue that a less capable robot could do the job just as well, but the 360 Eye also doesn’t need to run as frequently as some others to maintain a perceivable level of clean, precisely because it gets more on its first sweep. It’s also easy to transfer between floors to cover different areas on different days.

It costs a lot, it isn’t perfect and it certainly isn’t a must-buy for everyone. But it is the best robot vacuum right now.

Cons: can’t get under as much furniture, expensive, cannot be your only vacuum, requires internet access for most features beyond push-button cleaning, can get stuck like all robot vacuums 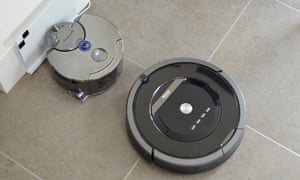 The Dyson 360 has a smaller diameter than the Roomba 880 pictured here, but is taller.

More in this category: « Eufy RoboVac 11 Robot Vacuum Cleaner Review: Well worth the money A Range of Low Cost Whole Home Mesh Wi-Fi Systems at Amazon UK »
back to top