There are many reasons people spend alot of money on an iMac, particularly the 5K 27in model.

But the big one is that, as well as being among the most attractive computers ever to have graced a desktop, it’s amazingly capable, too.

In fact, it’s so good that, once you’ve bought one, it’s probably not something you’ll upgrade for a while. With the original 5K iMac coming up to its fifth birthday, however, could now be the time to move up the next level?

If you were hoping for a revamp in design, prepare to be disappointed. The design of the 27in iMac is now into its sixth year and Apple still hasn’t seen fit to change anything about it. It’s what’s inside that counts.

And what’s inside is, it must be admitted, is pretty darned impressive. Indeed, squeezed inside the latest 27in iMac is a collection of components that push Apple’s largest all-in-one to unheard of performance heights.

This is a machine that, in some of its configurations, outperforms the lowest-spec iMac Pro, making it a viable alternative for anyone looking for an elegant yet powerful desktop workhorse. Apple’s tagline on its website for the new 27in iMac is “Pretty. Freaking powerful,” a sentiment that I would agree with entirely. 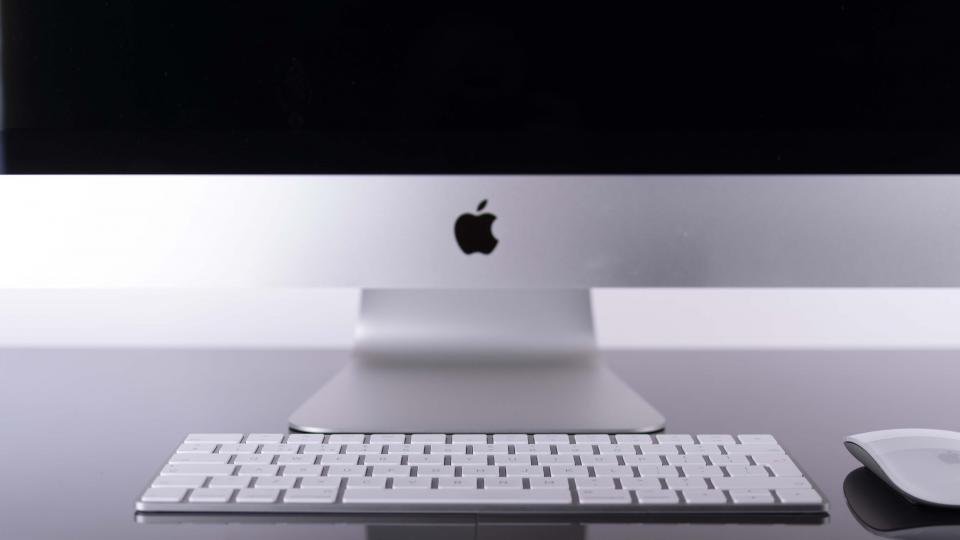 That should be enough power for most people – and a good deal more than you get with the Microsoft Surface Studio 2 for similar money – but for demanding professionals who need the most power in the sleekest package, the Apple iMac Pro is still the best choice. Prices start at £4,899 – around the same as the highest-spec 27in iMac, but with the Pro you can choose from a selection of far more powerful Xeon W processors up to 18 cores.

As I’ve said already, what’s most interesting about the refreshed 27in iMac is the updated internal components, because the exterior chassis and fundamental design haven’t changed a jot.

This is a touch disappointing, especially since every monitor and TV manufacturer on the planet now seems to be producing bezel-free screens, but at least the 27in iMac doesn’t look quite as dated as the 21.5in iMac. That’s because the black border surrounding the display is, proportionally, much narrower.

And, although I’d personally like a 27in iMac with thinner bezels, it would be harsh in the extreme to criticise it too strongly. The rest of the chassis is, put simply, a thing of beauty, and it remains one of the most beautiful desktop computers ever made. 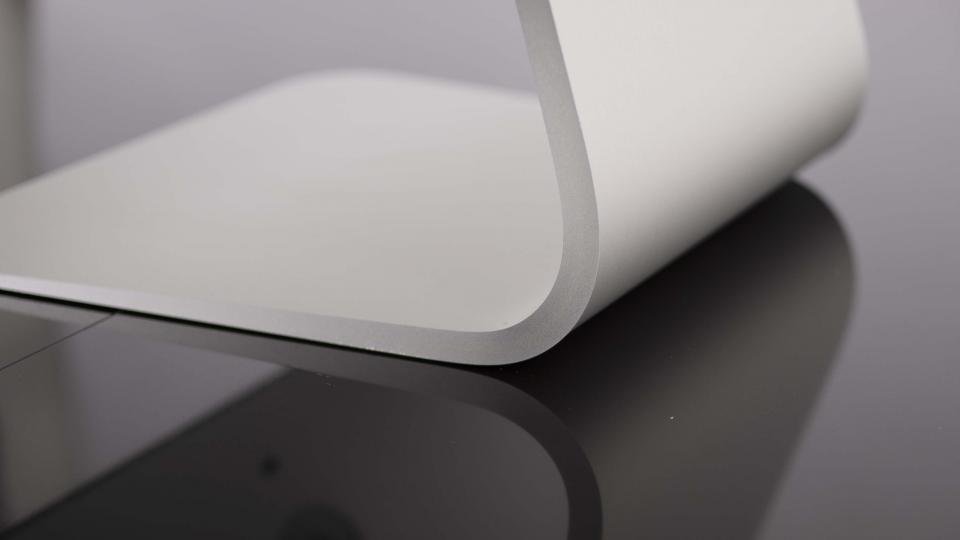 From its subtly curved rear and elegantly angled aluminium stand to its impossibly slim edges and sharply milled edges, the attention to detail here is something to behold. And, despite the fact that this design debuted way back in 2013, it has aged – like a classic car – incredibly well.

As such, you won’t be surprised to find that all the connections and features are in familiar places. On the rear, to the right of the stand, are the iMac’s Gigabit Ethernet port, its two USB Type-C Thunderbolt 3 ports, its four USB 3 Type-A ports, SD card slot and 3.5mm headphone jack.

On the opposite side (still at the rear) is the power button, power is supplied via a flush-fit kettle lead in the centre with the cable snaking through a hole neatly cut into the L-shaped stand, and the iMac’s wireless peripherals are still just as beautifully conceived and constructed as its chassis. I was supplied the wireless keyboard and Magic Mouse, but you can choose to have the 27in iMac supplied with the elegant glass-topped Magic Trackpad if you like.

One thing the iMac Pro has that the 27in iMac does not have – apart from its extra-moody dark-grey colour scheme – is the ability to VESA-mount the unit on a stand of your choice. Otherwise, there’s little new here and still a lot to admire. 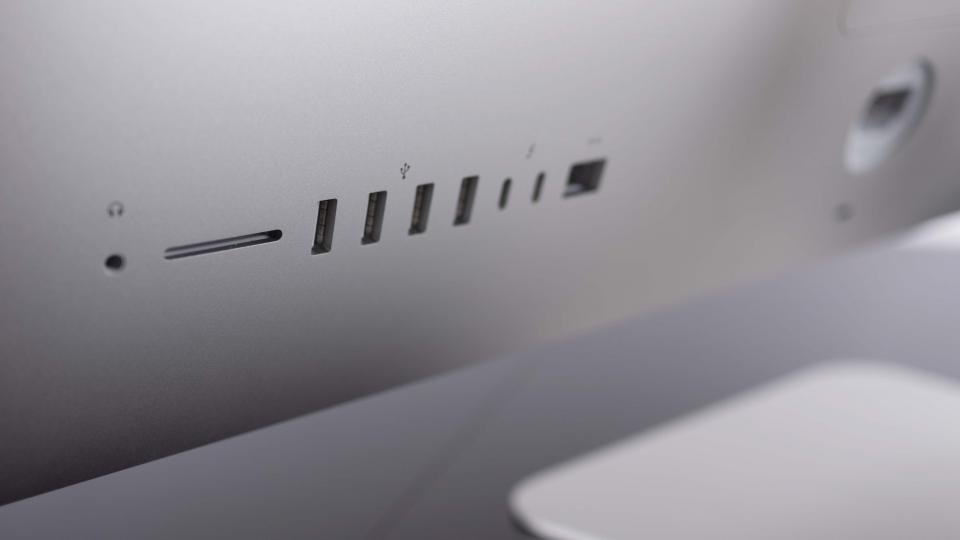 As I’ve come to expect from Apple products, the display of the iMac is of impeccable quality. It measures 27in across the diagonal, of course, and has a huge resolution of 5,120 x 2,880 pixels, giving you acres of space in which to spread out. This display is a spreadsheet warrior’s dream.

Its performance is sublime. It’s a 60Hz screen and uses fairly well-established IPS panel technology – nothing new there – but colour performance is superb, and that’s what counts for the iMac’s customer base of creative professionals.

Natively, the iMac’s display is calibrated to reproduced the DCI-P3 colour space, which covers a wider spread of colours than most Windows PC monitors or laptop screens. Despite this, it’s also capable of reproducing sRGB imagery accurately. Essentially what this means is that content you’re looking at on the web won’t look oversaturated while you’ll be able to work with an expanded gamut in professional applications such as Final Cut and Adobe Photoshop. 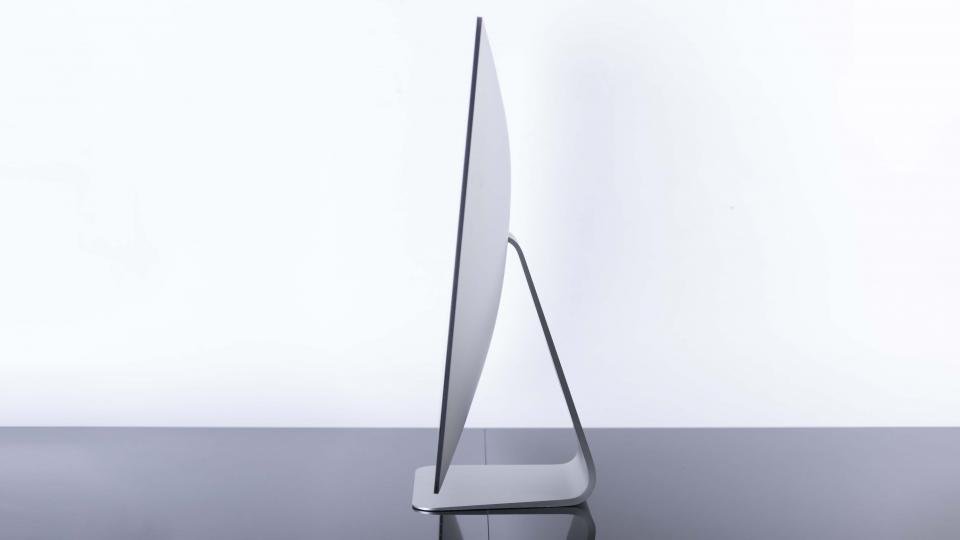 Colour accuracy and gamut coverage within the DCI-P3 colour space is highly impressive. Using the default “iMac” colour profile, I measured a Delta E value (compared with DCI-P3) of 1.27, which is extraordinarily good (a lower score is better here). Meanwhile, peak brightness reaches 540cd/m2; contrast is good too, hitting a measured ratio of 1,063:1; and brightness uniformity across the display is great, deviating at most an average of 5.4% when compared with measurements taken from the centre of the screen.

In short, out of the box, the iMac is suitable for all types of colour-critical work and a match for many professional-level monitors. It is absolutely superb.

It’s the 27in iMac’s raw speed, however, that is its strongest suit and that’s thanks to a line-up of new ninth-generation Intel processors. Our review sample employs the eight-core 3.6GHz Core i9-9900K, which Turbo Boosts to a maximum frequency of 5GHz, the higher specification AMD Radeo Pro Vega 48 (with 8GB of VRAM) plus 16GB of DDR4 RAM and it’s a beast. It returned benchmark results in our in-house 4K media transcoding and multitasking benchmarks that match those of the eight-core iMac Pro I tested in 2018.

It’s seriously quick, in other words, and that performance translates across the Geekbench CPU benchmark, the GFXBench Metal (Manhattan) graphics test, Cinebench R15 and LuxMark tests, too.

This is one beefy machine, capable of taking everything in its stride, from editing and rendering 4K video right through to running professional 3D applications.

As with the 21.5in iMac, I can’t recommend you purchase an iMac with a mechanical hard disk. It simply doesn’t make any sense. Likewise, though, don’t make the mistake of specifying the 1TB or the 2TB SSD because you’ll be paying through the nose. Upgrade from the 2TB Fusion Drive and you’ll be paying £550 from the 1TB and £990 for the 2TB.

The question is, is the new iMac 27in worth the money? After all, you’ll be paying upwards of £4,000 if you want the more powerful Core i9 model and nearly £1,749 for the base level, eighth-generation Core i5-based model.

That’s a lot of money and from the prices of the SSD upgrades it’s clear that you’re paying a premium for the design and the name on the box. But, remember, you’re also getting a superb 5K screen built into a fabulous chassis that has yet to be improved upon by any other manufacturer, notwithstanding the fact that it’s getting on in age now.

So, the answer, in a roundabout way, is yes. If you need the power and you have the money, the 2019 Apple 27in iMac is (alongside the 2018 iMac Pro) the most powerful, most elegant desktop PC money can buy.