The Amazon Fire 7 tablet is the great example of what makes Amazon such a tough company to compete with.

As a product, it’s a little basic but it’s so keenly priced that no other manufacturer can come close to matching its combination of features for the money. Any competitive product they could theoretically make would be produced at a loss.

The new model, which Amazon is simply calling the Fire 7 (9th generation) continues this trend. It’s ultra cheap and conservatively designed, but it does the job well.

As we’ve seen previously, this new model doesn’t add much to Amazon’s tried and tested design. The plastic chassis has identical measurements to 2017’s Fire 7 tablet and it has the same size and resolution screen at 7in and 1,024 x 600.

Like the last model, this new Fire 7 has two fixed-focus cameras – one at the front and one at the rear – plus a microSD card slot, a single speaker and a 3.5mm headphone jack. As with all of Amazon’s homebrew tablets, it runs Amazon’s own software (based on Android) and app store, gives users direct access to Amazon’s music, video, ebook and shopping services but restricts access to Google Play.

What’s different about this model, however, is that it has full, hands-free Alexa compatibility, extra storage and comes in new colours. 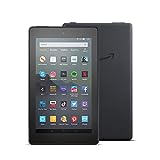 This is a cheap tablet, so you shouldn’t be expecting luxurious finishes and materials, but the Fire 7 remains a well-made, robust-feeling product. The matte-plastic casing and display feel nicely made and the whole thing is robust enough to take quite a bit of abuse.

I know this is true. One of my kids has been chucking an Amazon Fire 7 around (quite literally) for a couple of years now and it’s still going strong. Sure, there are a few cracks running across the screen – thanks to a rather abrupt encounter with a metal bed frame – but it still works it still looks pretty tidy. The three new colours – plum, sage and twilight blue – are a bit of an odd choice, though. They’re more muted than the usual bright hues Amazon favours and won’t appeal quite as much to children.

As far as core features go, nothing has changed and, as the years pass, the Fire 7 is looking increasingly dated. The 1,024 x 600 resolution IPS screen looks fuzzy and pixelated by modern standards, the broad black bezels are ugly and the 2MP fixed-focus cameras are functional at best. It’s also high time that Amazon moved on from the micro USB charging port, which severely limits charging speeds. 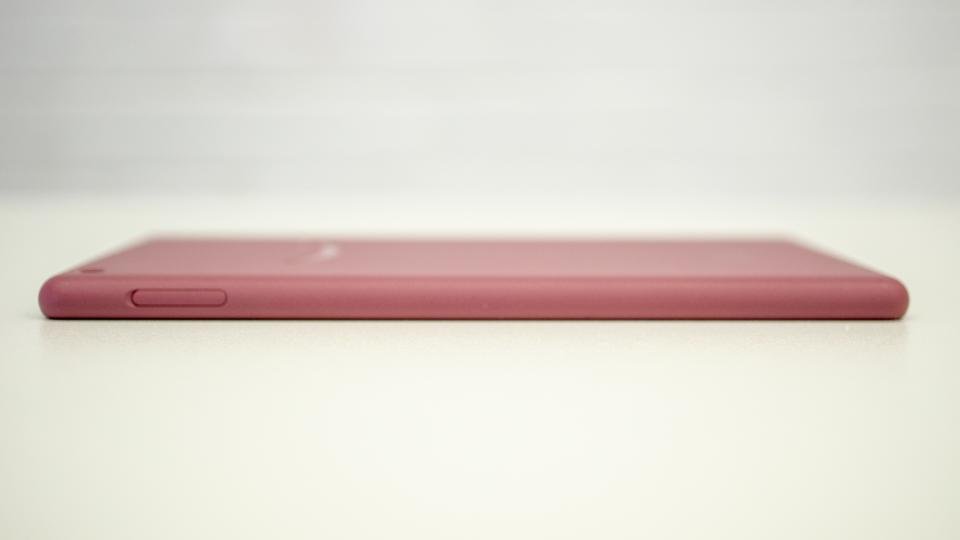 Still, the tablet does, at the very least, have twice as much storage now than it used to, which is not an upgrade to be sniffed at. The old tablet’s 8GB of space was too small to hold anything more than a small handful of apps and my daughter is constantly having to uninstall apps to make room for new ones. The 16GB is far more generous and, don’t forget, there’s also a 32GB model for a mere £10 more, plus you can upgrade via microSD up to a further 512GB.

The Alexa support is the big new feature with this model but, just to be clear, it’s nothing new when it comes to Amazon’s Fire tablets. With the previous update to the Fire 7, Amazon was also boasting about its Alexa functions and the Fire HD 8 and Fire HD 10 both have Alexa baked in as well.

So what on Earth is Amazon going on about here? The difference is in how the 2019 model supports Amazon’s digital butler: Alexa is now completely hands-free, which means you no longer have to hold down a button on the screen to talk to your smart assistant. This tablet is, effectively, a slimline smart speaker. 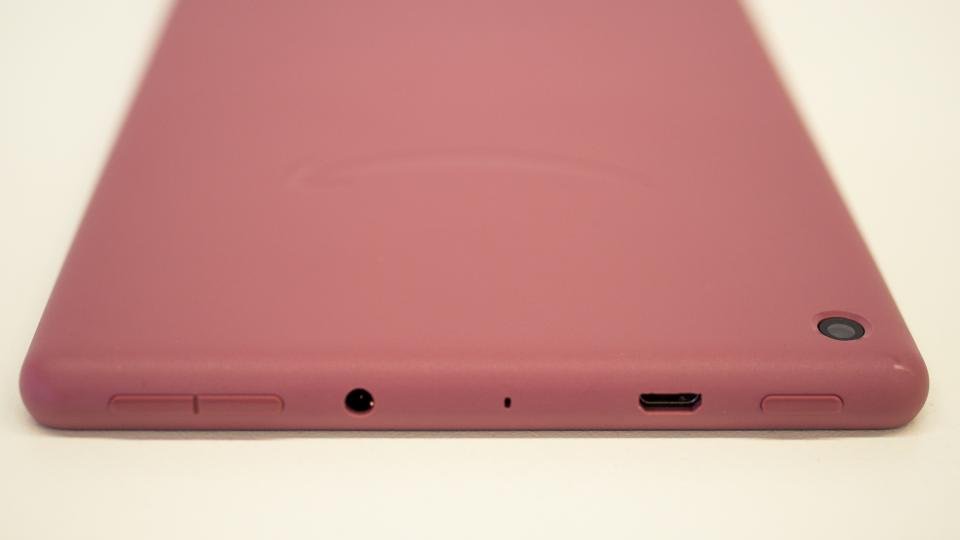 As with Amazon’s 8in and 10in Fire HD tablets, it’s a function that works rather well. You get added visuals with certain requests (like “what’s the weather?”) and tips that help users learn how to use Alexa. It’s a great introduction to the technology.

Don’t expect it to perform exactly like a full-blown Echo speaker, however. The microphones aren’t as sensitive, for a start. Step away from the tablet a bit too far, add a bit of background noise into the equation and your pleas for Alexa’s attention will fall on deaf ears.

Aside from this, Alexa on the Fire 7 is just as fully featured as it is on the Echo speakers, with no restrictions on features such as calling, messaging or drop-in. And one bonus is that, when the tablet is used in the same room as another Echo speaker with the same wake word (normally, “Alexa”), only one device will respond. 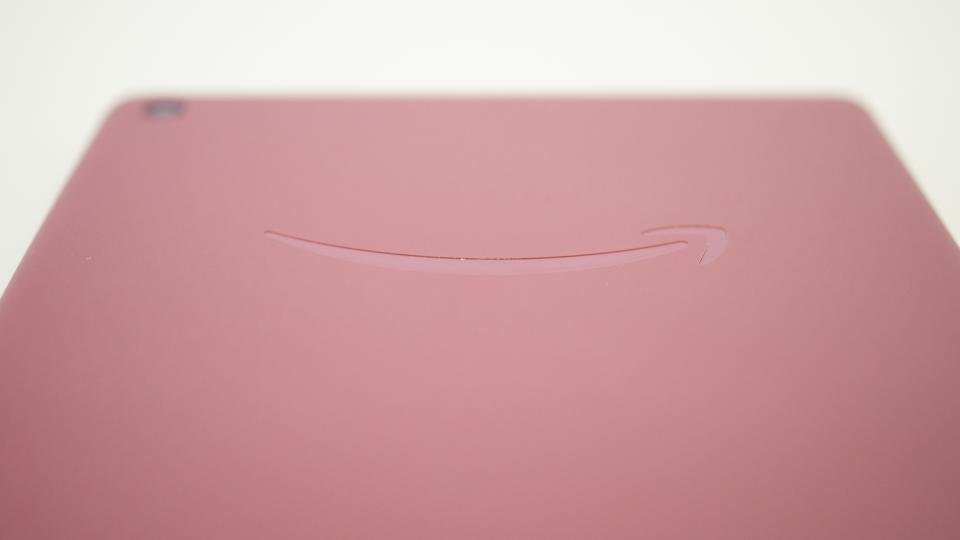 Clunkily-dubbed “Tablet ESP Behaviour”, this feature has to be enabled in the tablet’s settings but it worked well when I tested it, handing off playback duties automatically to my Echo Show 2 in the kitchen when the two devices were in the same room.

Despite the newly improved Alexa support, core performance hasn’t moved on too significantly. Beneath its chunky, plastic skin, the Amazon Fire 7 is endowed (although that’s probably too strong a word) with a 1.32GHz quad-core MediaTek MT8163 processor, backed by a meagre 1GB of RAM.

This is the same chip Amazon uses in its Fire HD 8 tablet but with half a gigabyte less memory. Suffice it to say, this is not a particularly responsive or quick combination of components. But, hey, it does the job for watching YouTube and Netflix and browsing the web. You can play casual games on it, too, without feeling overly frustrated, and reading ebooks is, clearly, well within the Fire 7’s capabilities.

Here are a few benchmark figures, though, just to set things in context. Oh, and just a quick note: the reason for the superior performance in the onscreen GFXBench test is that the Fire 7 has a much lower resolution display than the Fire HD 8. Otherwise, the scores would be pretty much the same.

In other words, the performance is okay – it’s a bit faster than the previous model and offers around the same performance as the larger, HD 8 and HD 10 models. The disappointment is that with even cheap smartphones now proving slicker and more responsive experiences, it feels as if this is something we shouldn’t have to put up with at any price. Apps frequently take an age to load on the Fire 7 and tapping on-screen switches and buttons can feel disappointingly sluggish.

Likewise, battery life is underwhelming. I’ve had some trouble running our battery benchmark, which means I can’t report an exact figure right now but I do know it will be short of eight-and-a-half hours, which is much less than the double figures both the Fire HD 8 and HD 10 achieved.

If I’m honest, I’m a tiny bit disappointed with the Amazon Fire 7 with Alexa (9th generation, 2019). I’m disappointed that it isn’t just a little more powerful and I’m not particularly happy with the battery life, either.

But, hey, it’s not as if Amazon is asking a lot of money for this tablet. Let me reiterate: this is a product that costs, in its cheapest form, a mere £50 – and that price hasn’t changed for years. Despite this, Amazon has still found room in the manufacturing budget to improve it slightly, with double the storage, a slightly faster processor, new Alexa features and the same tight integration with Amazon’s services.

With all that taken into account, it’s hard to be too negative. Temper your expectations and you’ll be perfectly happy with the Amazon Fire 7 – it’s the very definition of cheap and cheerful.