The Vertuo Plus goes big on features that add to the experience of brewing coffee, even though you may not think they are essential.

Rather than needing to manually rotate a handle to open the capsule holder, for example, it opens and closes automatically. Not with a button that would clutter its clean lines, but a gentle flick of its rim. It’s this elegance of operation that defines the Vertuo system – not to mention its ability to conjure long coffees with a thick, luxurious crema that would make you think you were looking at a milky latte. But yet, there's no milk in sight.

You don’t even need to select a cup size, constantly refill the water tank or empty the used pods more than every few days. It’s effortless and elegant: capsule coffee convenience, but not as we know it. Plus, with two new colours added to the range, “Cherry Red” and white, even the exterior goes beyond the standard black. 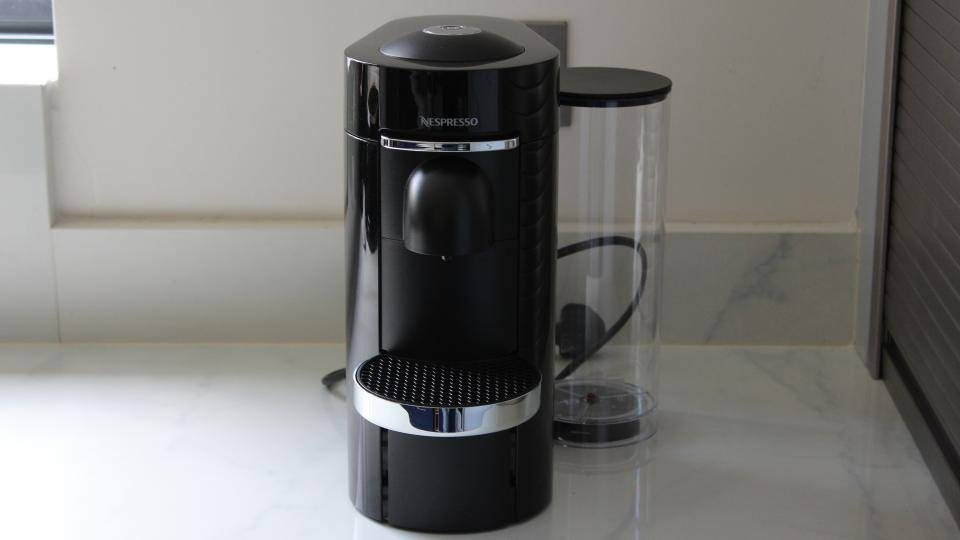 Most pod coffee machines focus on espressos and, if you’re lucky, lungos. Few offer longer drinks so, if you like a large coffee, your options were to buy a system that didn’t use high bar pressure (such as Tassimo), run extra water through your pod (and risk a bitter edge to your brew) or top up an espresso with hot water. A good-quality long coffee with crema from pods simply wasn’t on the menu.

The Vertuo system neatly solved this puzzle by introducing a new method of brewing – “centrifusion” – coupled with barcoded capsules that tell the VertuoPlus machine how much water to dispense for each.

What does this mean? You can pop in a pod and press a single button to brew a perfect crema-topped coffee. Each pod is tailored for one of five sizes, starting from a 40ml espresso ranging up to an all-day sipping 414ml alto, the volumes of which can be reprogrammed.

Some blends are designed to pair with milk (for which you’ll need the Vertuo Plus bundled with a separate Aeroccino milk frother for an extra £50), while others bring out the best of the coffee’s flavour. 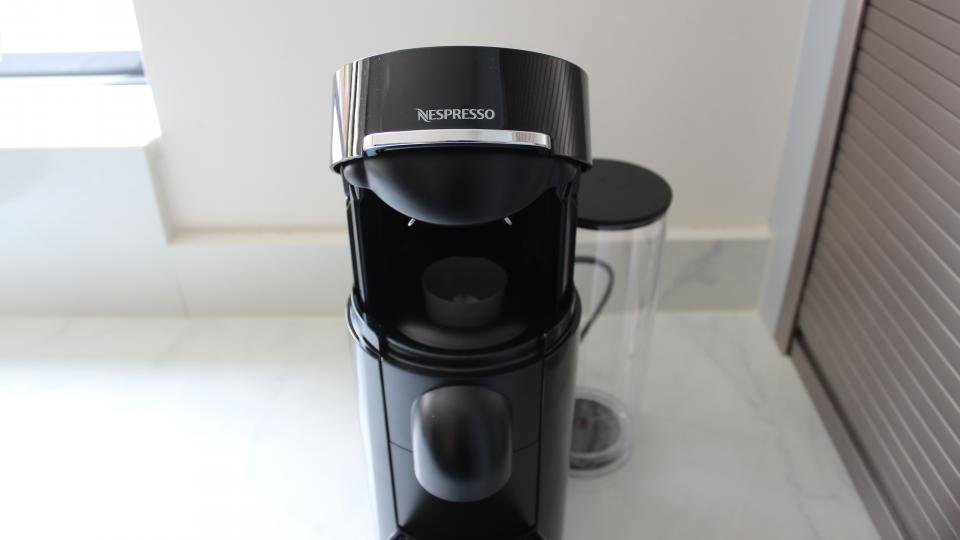 Since its launch, the Vertuo Plus has come down in price, so it’s far more affordable than you might think.

It’s now comparable in cost to mid-range original Nespresso machines such as the Pixie and CitiZ, and far cheaper than top-of-the-range models. The pods, however, can be more expensive, with individual capsules costing up to £1 each, although they average around 40-50p.

There’s also less choice of coffee than an original Nespresso machine as, while you’ll find a wide array of Nespresso-compatible capsules in the supermarket, there are so far no third-party options for Vertuo. 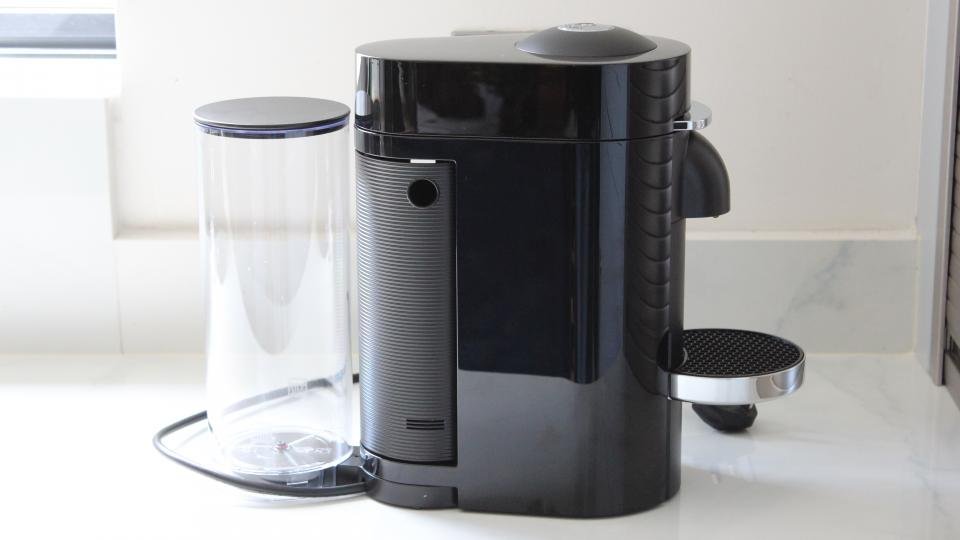 Perhaps one of the most appealing aspects of the Vertuo Plus is that it minimises maintenance. Not only will its 1.2l water tank brew drink after drink without needing a refill, but a large used capsule container at the back (rather than inside the machine) can be easily emptied and accommodates several days’ worth of discarded pods. Neither of these especially increases the worktop footprint.

Another useful feature is that the water tank can swivel to sit at either side of the machine (if your worktop depth is limited) or straight at the back (if width is limited). The 85cm power cable could be a bit longer, so you’ll still have to find a spot for it with a plug socket nearby, but the machine isn’t especially heavy at 4.6kg so you can move it around the kitchen easily.

Another handy feature is that the cup platform can be positioned at four levels or removed entirely, so it’ll accommodate everything from an espresso cup to a travel mug.

The ease of brewing coffee makes it a good machine for early mornings when thinking about drink sizes or temperatures is low on the list of priorities.

Use is as simple as inserting a capsule, closing the machine, adding a cup and hitting a single button on top (although you can also stop the coffee flow early if you like a shorter measure, or tap the button on top for extra).

There’s no need to wait for the Vertuo Plus to warm up as it’ll brew once it’s ready. The heat-up time is average for a pod machine at around 40 seconds from cold.

What sets the brewing process aside from the original Nespresso system is how each pod is used. With standard pods, there’s just one hole made in each for water to access the coffee, whereas the Vertuo capsules are pierced multiple times around the edge. The capsule is then spun inside the machine, while water is injected into it and “infused” with the ground coffee inside.

The process is referred to as “centrifusion” (a portmanteau of centrifugal and infusion). The upshot of this is that while the Vertuo Plus tends to start brewing quietly, it can be noisy as it spins faster.

Those who appreciate smooth drinks will love what the Vertuo Plus brews, as the coffee tends to have a naturally sweeter edge. Whether this is down to the blends chosen for the pods, a result of the brewing process or both, it’s a world away from coffee from a French press.

Every cup also features a thick crema that enhances the aroma. A final flourish comes when disposing of the used pod: it takes one flick upwards to raise the head of the machine, which removes the capsule from the holder and slides it into the container behind.

Pushing the machine’s lever down for a few seconds turns it off, or it’ll switch off by itself after nine minutes. The only issue we had with this was when we put in a pod and forgot about it – the machine turned itself off, then wouldn’t brew the unused capsule when we turned it back on again. 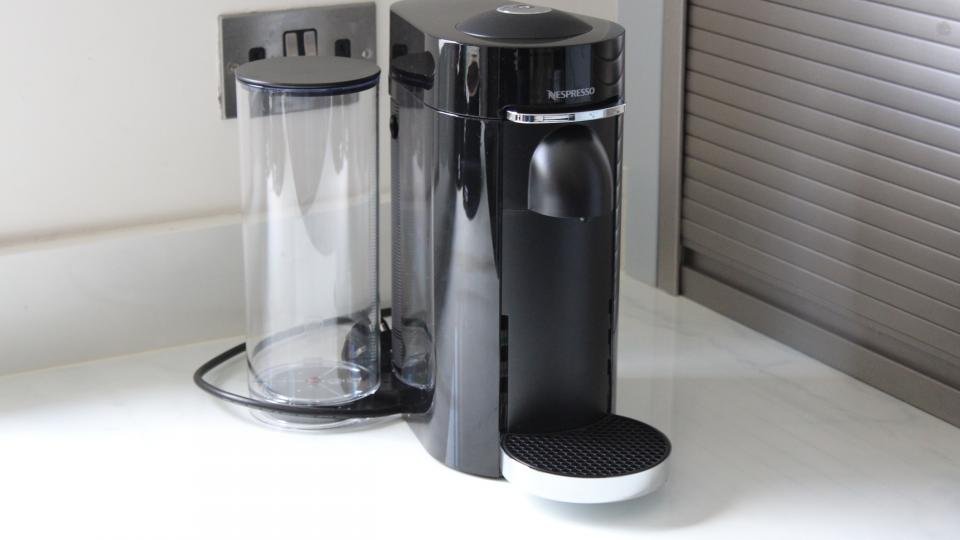 There are only a couple of removable parts to clean. The cup platform and used capsule container need to be washed by hand (neither is dishwasher safe), but the rest of the machine can be rinsed out using a cleaning program, which uses three cycles of water to keep the internal parts gunk-free.

There’s also a descaling alert and program for hard water areas. The cleaning and descaling modes are fiddly to access (it uses a combination of button and lever presses), so you’ll need to keep the manual to hand for a while.

If a low-maintenance, easy to use coffee machine is on your wishlist, the Vertuo Plus should fit the bill.

It’s sleek, requires next to no decision-making on bleary-eyed mornings and can make drink after drink without lots of emptying and topping up. The only real issue, besides a bit of noise when it gets going, is that you’re tied into the 26 Vertuo blends (plus a few special editions) so your choice of different coffees is limited, which it isn’t with the original Nespresso system.

It would also be good to see a built-in Aeroccino (so latte and cappuccino drinkers would only need to find one plug socket not two) but for making indulgent black coffee it’s practically faultless.