While every smartphone manufacturer on the planet was taking on board the medically recognised fact that beaming blue light into your eyes just before you go to sleep wasn’t great, Amazon chose to ignore that and ploughed on with its regular white LEDs in its premium Kindle ebook reader.

Finally, however, the retail giant has seen the light warm, orange glow and added the feature to the 2019 edition of the Kindle Oasis. You can now read at bedtime safe in the knowledge that it won’t be your reading habit that’s disturbing your sleep.

What else is new? Not much, if truth be told. The previous Kindle Oasis, in case you didn’t know already, was the most expensive, most luxurious of all the company’s ebook readers, and the new one replaces it. It sits above the regular Kindle and the Kindle Paperwhite in the pecking order, and is a direct rival to the rather excellent Kobo Forma.

It’s slimmer and sleeker than the cheaper readers and its all-metal body feels nicer to hold. It has a larger, higher-resolution display, too, supports Bluetooth playback of Audible audiobooks and it’s IPX8 waterproof. The Paperwhite shares the latter two features but misses out on other features, such as automatic light and page-orientation adjustment. 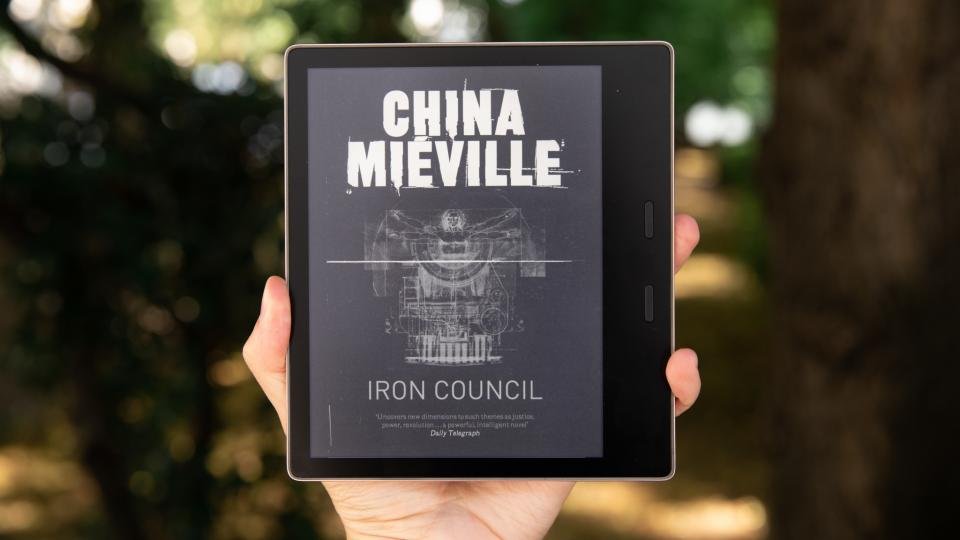 The 2019 Kindle Oasis’ big new feature, however, is its “adjustable warm light”, which lets you switch from the standard white LED over to an amber light. This feature promises to reduce the amount of blue light you experience when you’re reading just before going to bed. The new Kindle has a slightly bigger battery than before (1,130mAh vs 1,000mAh), and it’s also now available in a rather fetching of gold.

The new Oasis’ physical appearance is – you guessed it – identical to the previous model, which is to say it’s pretty from the rear and not so attractive from the front. The anodised aluminium finish feels lovely and smooth under the finger, particularly in gold, and there’s a little step about two-thirds of the way across, giving you a grip to hold onto.

I’m not a huge fan of the rather ugly black border surrounding the screen at the front, though, or the fact that the border is asymmetric and much wider on one side than the other. It looks lopsided and awkward.

This does have a practical side effect, however. The side with the wider border houses the reader’s two physical page-turn buttons – a feature no other current Kindle can boast – and it gives you a little more to hold onto as well. 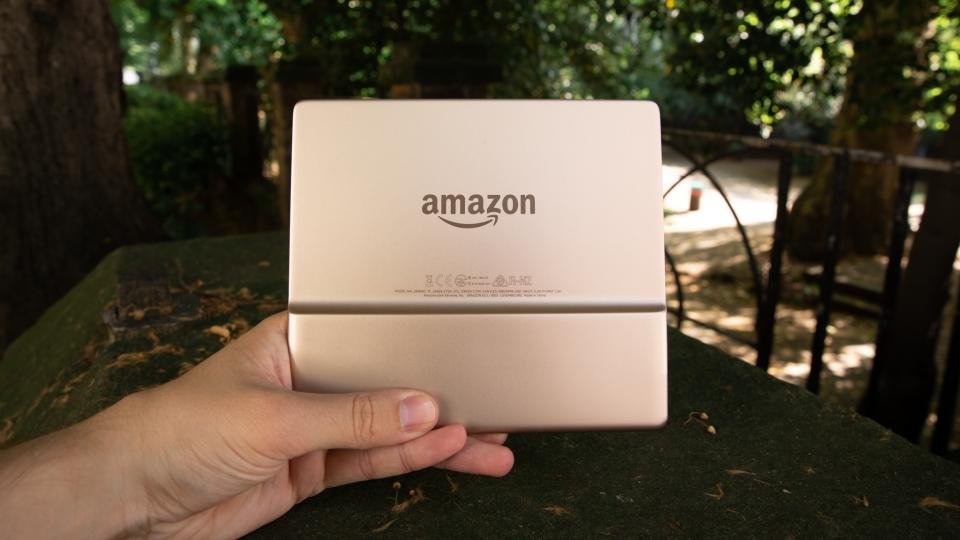 While I’m talking about lopsided borders, I might as well mention at this point that you can hold the Oasis with the wide border to the left or the right of the screen. The display will flip orientation so it’s the right way up however you hold it. Again, this a feature neither the Paperwhite nor the regular Kindle can boast and it’s another small reason you might want to consider shelling out a bit more on the Oasis.

Elsewhere, the Kindle Oasis (2019) remains super light, weighing a mere 188g, is extremely comfortable to hold for long periods and is still waterproof to IPX8, which means it can be submerged in fresh water to a depth of two metres for up to 60 minutes.

It retains most of the rest of the previous Kindle Oasis’ key features, too. There’s Bluetooth, which lets you connect a pair of wireless headphones for listening to your Audible audiobooks. And if you own both ebook and Audible audiobook editions, the Oasis can synchronise your reading position between the two. 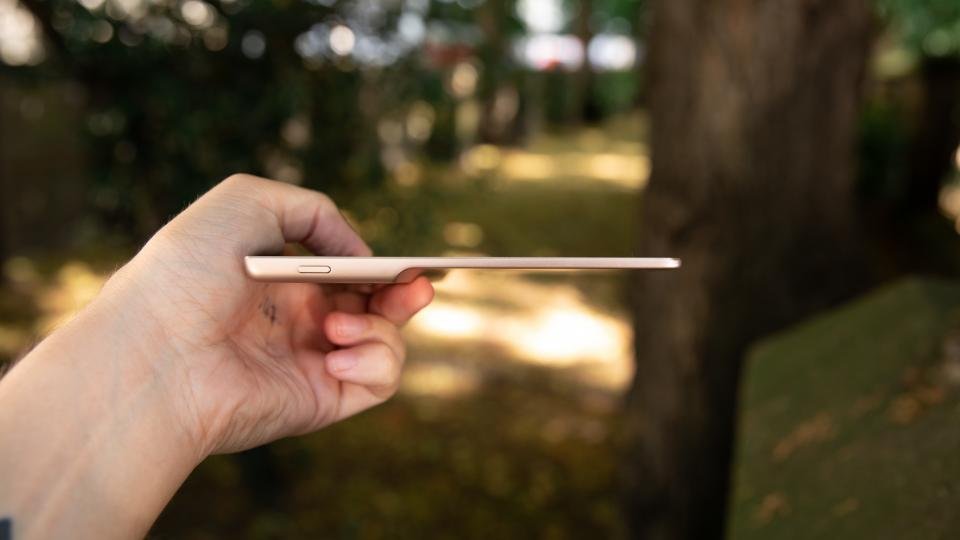 Surprisingly, given the Audible functions, you still can’t add extra storage via microSD, which is just baffling, and neither can you connect old-school analogue headphones, as there’s no 3.5mm headphone jack.

One final note of mild disappointment is that new Oasis no longer seems to have magnets embedded at the rear so it won’t work with the attractive, magnetic slimline cases the previous Oasis worked with.

As before, the Kindle Oasis has a 7in E Ink touch-compatible display, with a pixel density of 300ppi. This delivers a superlative reading experience. E Ink displays are easier on the eye than the LCD and OLED screens on phones and tablets and, as a result, are more comfortable to read for long periods of time.

It’s monochrome, but you don’t need colour for reading books and at that task the Oasis’ display excels. Characters on screen are sharp and clear, and the contrast between text and page background is excellent. It’s not precisely the same as reading a proper book – the screen background is a little greyer and the text not quite as dark – but it’s still perfectly readable. And, of course, the advantage of an e-reader is that you can tweak the line spacing, character size and font, margins and justification to your liking. 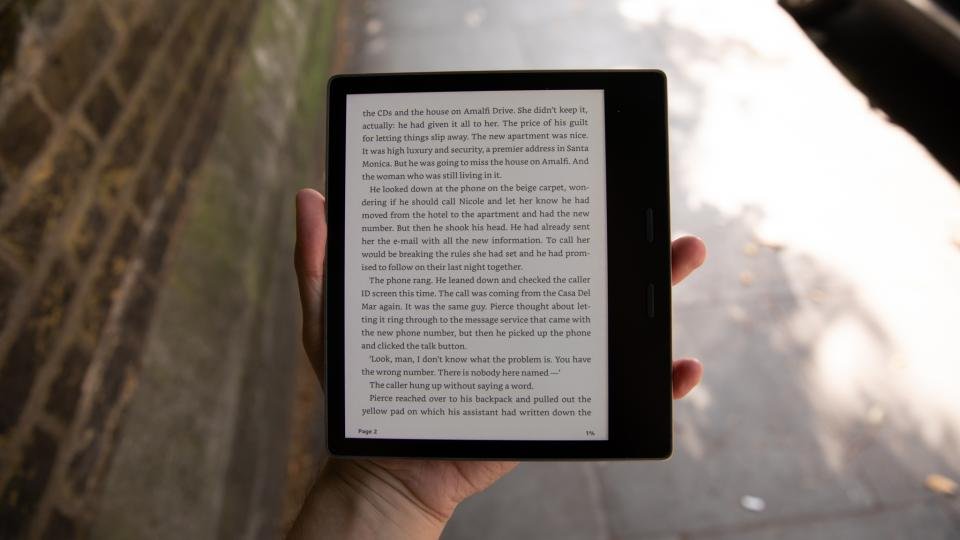 As with the previous Oasis, the new version has a touchscreen, and this works well. It’s mainly used for general navigation around the Oasis’ UI, which is largely the same as all Kindles, accessing settings, and buying ebooks in the Kindle store. You can also it to turn pages by tapping or swiping, though I found myself using the physical page-turn buttons to keep the screen clear of fingerprints.

For reading at night or in dim conditions, the Oasis has a series of built-in white and amber LEDs arranged around the edges of the display. In daylight mode, these cast a perfectly flat, even glow across the screen and they can be adjusted manually or automatically, according to the ambient light conditions.

The adjustable warm light works equally well. A secondary array of 13 amber LEDs illuminate the screen in varying degrees of orangey light. The aim is to reduce reader’s exposure to blue light just before going to sleep and thus improve your quality of their sleep. As with the white LED lighting, the “warmth” of the display can be adjusted by way of a simple, onscreen slider control: slide it to the right and the screen takes on a pronounced orangey appearance; slide it to the left and the effect is more subtle. 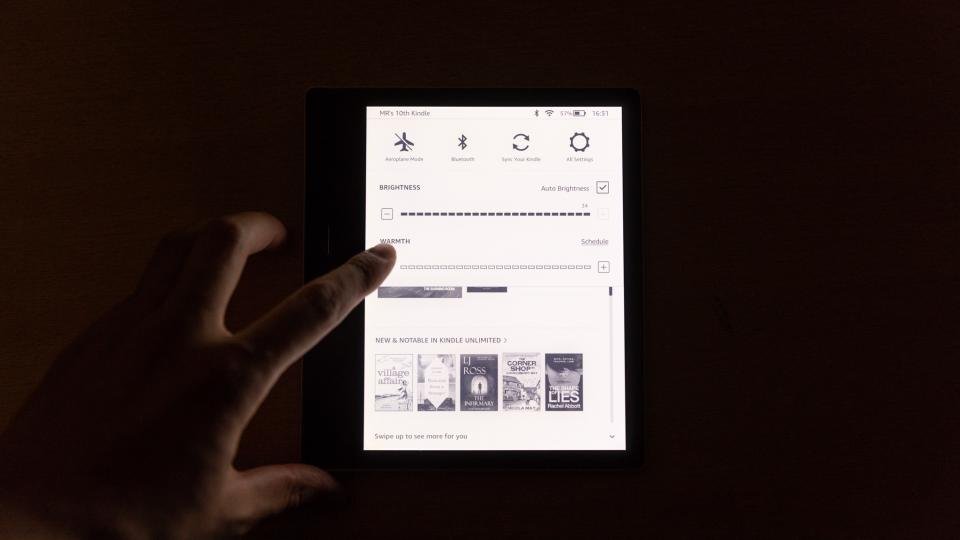 ^ There are 12 white LEDs, which light the screen perfectly evenly 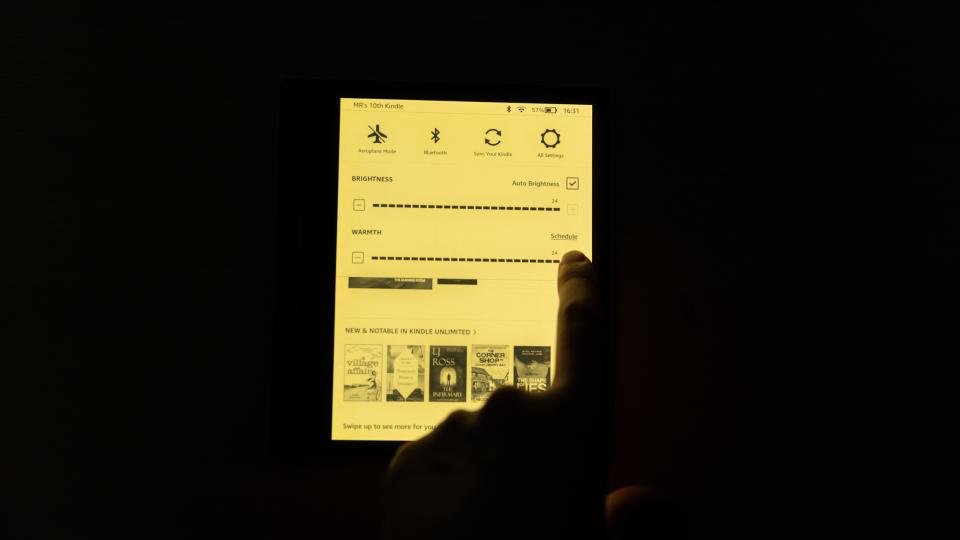 The effect can be simply adjusted manually like this or you can set it to switch on and off to a predefined schedule. It’s also possible to have it fade in and out in synchronisation with the sunset and sunrise. However you choose to control it, though, the LEDs produce a perfectly even illumination across the display with no bright or dim spots at all brightness levels.

This is, no two ways about it, a great new feature and one I’ve been wanting for a very long time; all the same, the new Kindle Oasis is not what you could call an essential upgrade.

Aside from the new warm front light and the rather strange withdrawal of the cover magnets from the rear, it’s exactly the same Kindle as the previous model at exactly the same price. If you already own an Oasis, don’t waste your money.

Anyone looking to move up to Amazon’s luxury ebook reader who might have previously been considering the 8in Kobo Forma can now comfortably turn their gaze back to Amazon. With Audible audiobook support, IPX8 waterproofing, super-sleek design and Amazon’s peerless ebook catalogue included, the Kindle Oasis remains at the top of the e-reader tree. It’s simply sublime.