Whether it’s Kindles, Fire Tablets or Echos, each new version brings small improvements that you weren’t aware you needed until they arrived.

The Echo Dot with Clock is a great example of this – far from an essential upgrade but very nice to have. And you’d miss it if you ever had to downgrade. 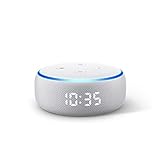 Since reviewing last year’s third-generation Echo Dot, it’s become a friendly night-time ally. It can turn off the lights, saving me bumped knees trying to navigate the room in the dark, and it can play a series of sleep sounds to lull my unsettled mind to rest. 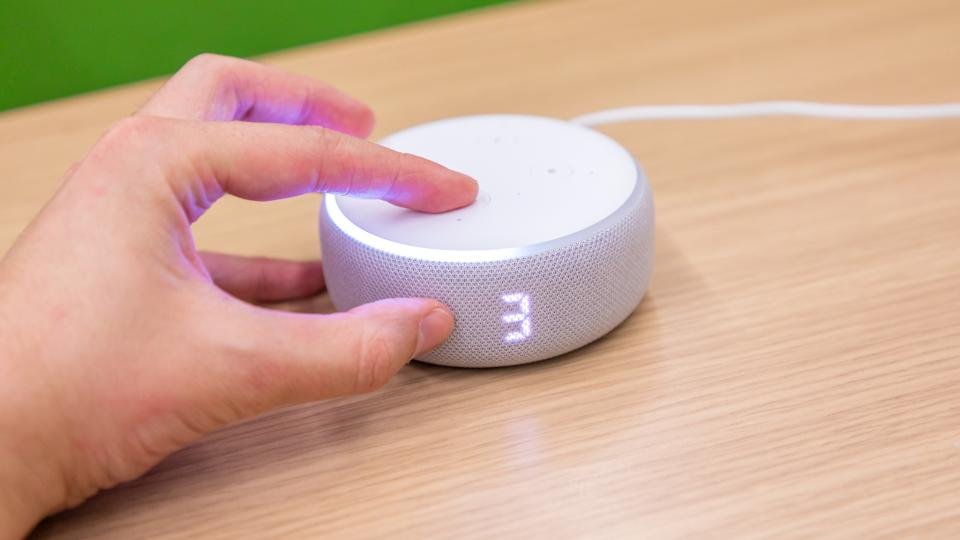 But there’s a problem. While it can tell the time, you have to ask it out loud, and then have it shout it back to you. That’s not ideal if you share a bed with someone, or have thin walls and neighbours who don’t appreciate your 3am Alexa chinwags.

Yes, you could have a digital clock, too, but the new Echo Dot with Clock kills two birds with one stone by displaying the time in bright LEDs across its side. The built-in clock can also show timers, the volume and the temperature outside. That’s essentially the only difference between this and last year’s excellent Echo Dot. 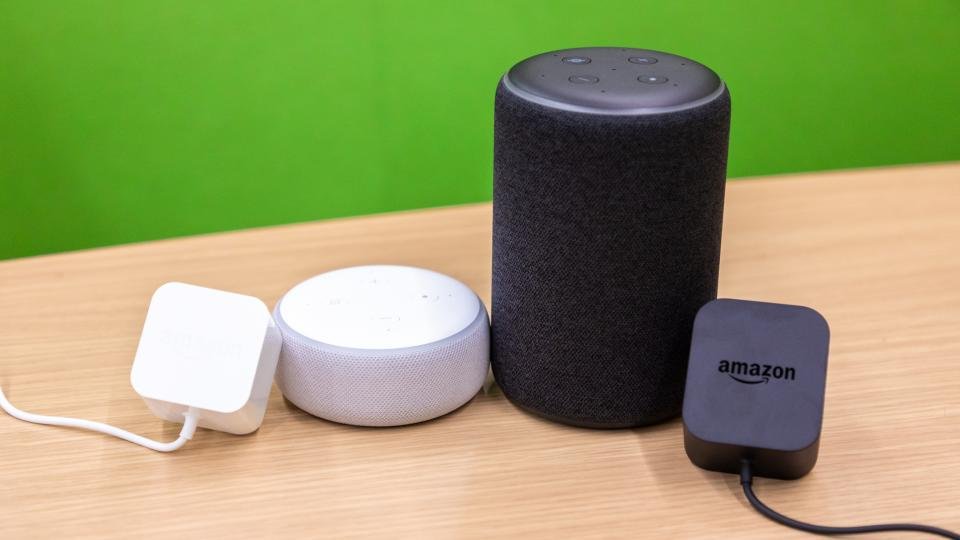 Then there are the Google-branded versions. Cards on the table: for me Google Assistant is streets ahead of Alexa in the smarts department but the Google Home Mini is severely hobbled due to its lack of 3.5mm audio jack and weaker audio performance. Astonishingly, this hasn’t been fixed on the new and rebranded Nest Mini. Both will set you back £50.

There are, of course, bigger smart speakers from the Echo Plus to the Google Home, plus a number of third-party speakers.

Finally, there’s the Echo Wall Clock. This isn’t a smart speaker itself but it does connect with other Echo devices to show any live timers set as well as the time.

When switched off, the Echo Dot with Clock looks exactly like last year’s model. It has the same chunky 99 x 99 x 43mm dimensions of the previous model, and sticks with the fabric wrap, which wraps around the sides. It’s a look that actually works well – it’s certainly a lot nicer than the plastic puck of the second and first generation Dots, only the former of which was released to the UK. 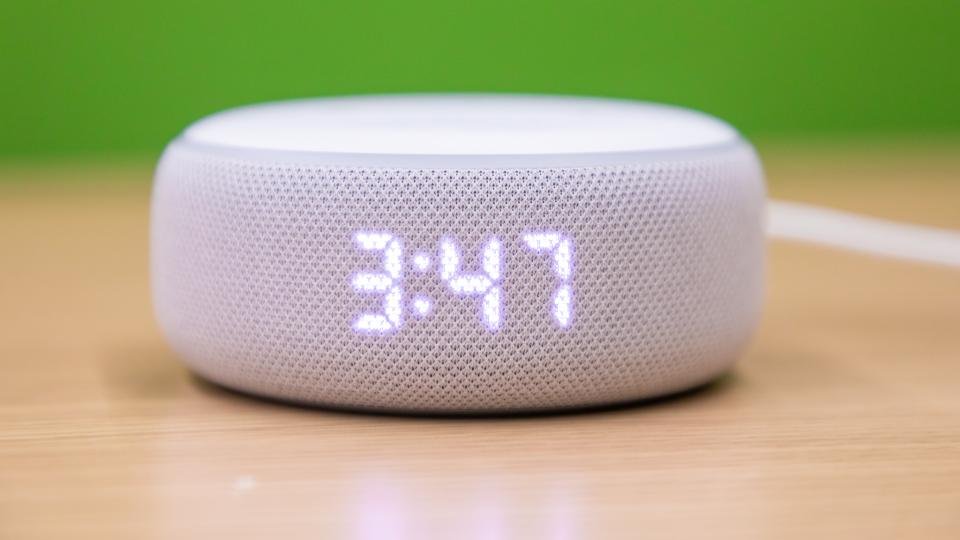 It’s only when you plug it in that the new change becomes apparent. Underneath that fabric is a segmented LED display capable of showing a digital clock and shows other things when required. It won’t be displaying advanced graphics or video like an Echo Show but it works well, and adapts its brightness to meet the needs of the room.

Amazon clearly has two rooms in mind for the Echo Dot with Clock: the kitchen and the bedroom. The former is handy for cooking, as the clock is replaced with a visual countdown when a timer is set. In the bedroom, setting an alarm places a small circle next to the time and neatly lets you silence an alarm with a tap on the top, like the snooze functions of old.

Adding a clock is a small change but a significant one, especially if you keep the Echo Dot in the bedroom as I do. Currently, I have an old iPhone dock radio alarm clock. Given the iPhone it used to house – a 2009 iPhone 3GS – has long since departed, it only exists to tell the time. With the Echo Dot with Clock, it is no longer required at all.

If you keep it in the kitchen, the timer functionality comes in super handy. With other smart speakers, you have to ask how long is left every time you want to know, and obviously being able to see it at a glance is far more convenient. Knowing what the temperature is outside is less essential but it’s nice to have nonetheless. 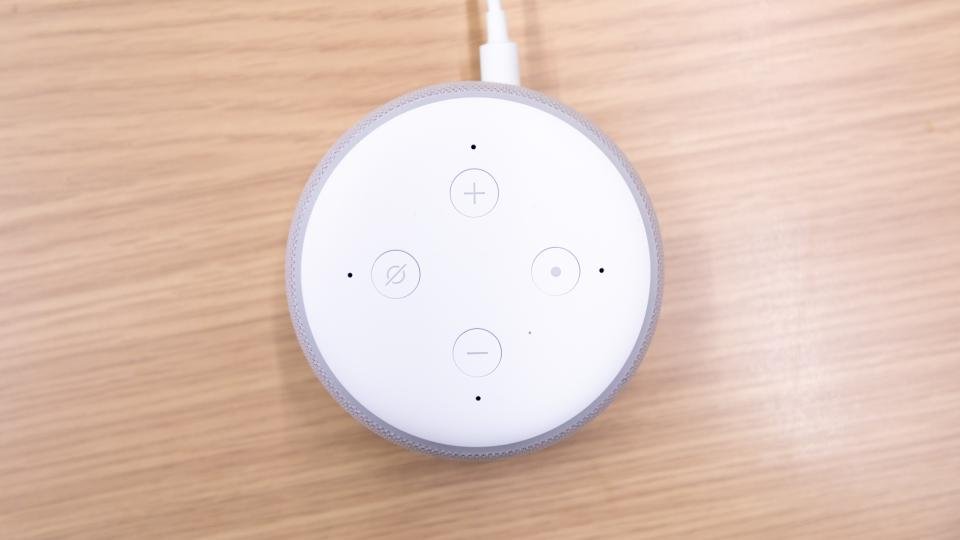 But what about the sound quality? Well, same old, same old really but that’s actually good news. While the second-generation of Echo Dot (the UK debut) had pretty thin, tinny sound, which was good for audiobooks but not much else, the third generation fixed that with performance in line with what you can expect from a £50 speaker.

Putting last year’s model and the clock version side by side, and alternating the same track between the two, I’m pleased to report the two are indistinguishable with surprisingly resonant bass response and a reasonably rich music playback across the frequency spectrum. You can even pair a couple of Echo Dots for makeshift stereo sounds, which improves things a touch.

I don’t want to overstate the audio fidelity, because the Dot’s sound quality isn’t up there with a £100 speaker or anything but it goes toe-to-toe with most £40 Bluetooth speakers, which is a bit of a triumph when it does so much more. And, most importantly, it retains the 3.5mm audio jack output, so you can always plug it into a better quality speaker if you buy one at a later date.

As for Alexa, it’s business as usual here, which is unsurprising given the smart assistant lives in the cloud rather than locally. Any advance in intelligence would hit all Echo devices at the same time. Here, I’m in two minds: as I said earlier, Google Assistant is just far better at answering questions and hearing what you’re saying clearly. But for the basics, Alexa is just fine: ably playing music, radio and podcasts, connecting with smart home gear and telling you about your day.

One more thing I noticed with this and the new third-generation Echo: Alexa has a new, smoother sounding voice, closer to Google Assistant’s to my mind. Oddly, this hasn’t arrived on any of the other Echos dotted around my house but hopefully they’ll change to match eventually. It’s not a huge selling point if they don’t, but it is a bit easier on the ear.

In short, the Echo Dot with Clock is everything you’d expect it to be and has the same pros and cons as before. The LED display is extremely welcome offering little “glance details” without detracting from the screen-free charm smart speakers were supposed to offer in the first place.

Alexa still isn’t as good as Google Assistant but in terms of hardware, the Echo Dot comfortably beats the Google Home Mini, so until somebody puts Google Assistant in a dinky speaker with a 3.5mm audio jack, Amazon has this market pretty much sewn up. The clock is just icing on an already delicious cake.