The Acer TravelMate X3 is a quite chunky 14in business laptop. But that’s fine. If power is more important to you than portability then there are advantages to going up in girth.

The most obvious is that a larger chassis gives more room for cooling, and that in turn means that you can expect the processor inside your machine to keep going at its maximum speed for longer. And so it proved here. Where similar laptops might advertise higher clock speeds than they can comfortably sustain, the Core i5-8265U inside the X3 kept churning away at over 3GHz without complaint even in heavy-duty benchmarks.

That resulted in an overall score of 81, and in reality few people will ever complain about this laptop’s speed. The only exception, as ever for a machine that relies on Intel’s UHD 620 Graphics, is if your task involves 3D acceleration. For example, it only managed 29.6 frames per second in the offscreen GFX Bench Open GL Car Chase test. 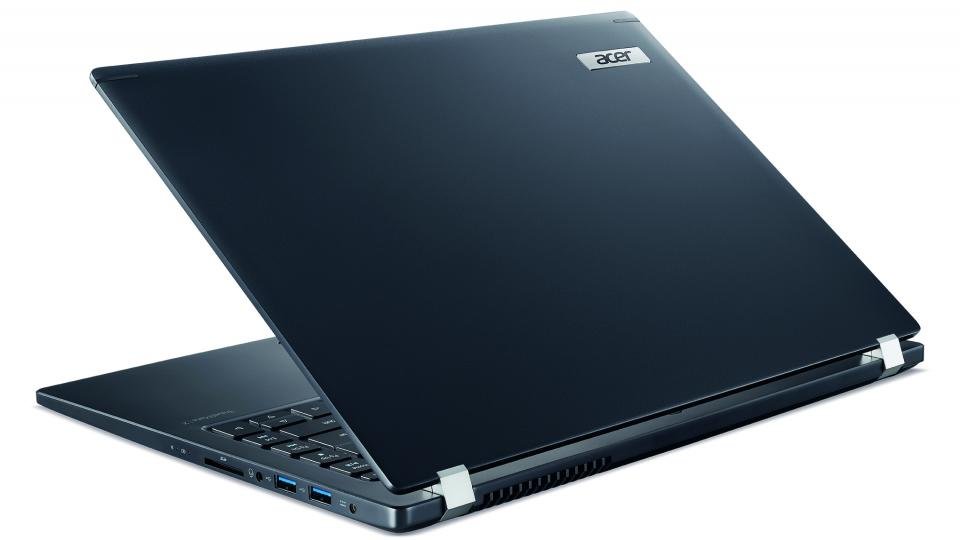 The other advantage of a bigger chassis is that manufacturers can include a larger battery, with the X3 featuring a 59Wh unit. That’s almost twice the size of the X5’s, and allowed the TravelMate to carry on without a top-up for 12hrs 16mins. Note that you can charge the laptop via the USB-C port on the left, but Acer provides a conventional, compact charger as standard.

Also see: Why You Need More Than Just Antivirus

The USB Type-C port can also be used for connecting an external monitor, but you may prefer to use the full-size HDMI output. There’s even a D-SUB connector for hooking up older projectors. Another potentially useful inclusion is the Ethernet port, again sitting on the left-hand side, with a USB 3 slot to round things off. The right-hand side is similarly packed, with two USB 3 ports, a 3.5mm combo jack and an SD card reader.

As this plethora of ports hints at, this isn’t the world’s slimmest laptop: it measures 19.9mm from top to bottom, while it’s an inch wider than an A4 sheet of paper at 328mm. I wouldn’t describe it as bulky, though, and a weight of 1.53kg is perfectly respectable for a 14in laptop. (Note that Acer’s website undersells its weight at 1.6kg.) It’s well built, and Acer has reassuringly put the X3 through a number of MIL-STD 610 tests. With an all-aluminium chassis, I’m optimistic that it would survive three years of daily commuter abuse.

Acer backs up this capable design with a high-quality keyboard, with generously sized keys, a substantial feel and an absolutely huge touchpad. The only thing it may take you time to get used to is the column of keys to the right, where Acer has chosen to place Delete, Home, Pg Up, Pg Dn and End. I found the backspace key particularly difficult to locate while typing.

You’ll search in vain for a fingerprint reader next to the touchpad, but that’s because it’s integrated into the power key just above the keyboard. This makes perfect sense – you’ll be pressing it anyway, after all – and by backing it up with an infrared webcam, Acer has all the Windows Hello bases covered. Note the processor isn’t compliant with Intel’s vPro platform, though. Acer claws back some management favour by making the hard disk and RAM user-upgradeable, via slots on the bottom of the chassis. As this model only includes 8GB of RAM and a 256GB SSD, both of those options could come in handy.

I’m also a fan of the 14in Full HD screen Acer supplies, with a matte finish that proved excellent at deflecting light. It peaks at 330cd/m2 and scored top marks in our quality tests: 93.4% sRGB coverage and an average Delta E of 0.63 point to a colour accurate panel. The corollary is that it won’t be a brilliant choice for streaming movies and the speakers are comically poor, so don’t choose this as your primary entertainment machine.

This laptop isn’t without flaws, but considering that you’re buying a Windows 10 Pro laptop with considerable battery life, plenty of power and quality in all the most important places, it’s hard to baulk at the asking price. The only caveat is that the one-year limited warranty isn’t reassuring, but the £150 Acer wants for a three-year on-site warranty is reasonable. Once again, Acer delivers an excellent value laptop that’s well-tailored to small businesses).