Gaggia’s much-loved Classic has been around since 1991.It has developed something of a cult following thanks to its simplicity, style and – naturally – its ability to serve up a mean cup of espresso.

Almost three decades since its inception, Gaggia has given the Classic a bit of a makeover and it has returned better than ever.

Forget about touch-sensitive buttons, fancy LED lights and colour touchscreens – the Gaggia Classic is a stripped-down machine built to do one thing well: make great coffee.

It might lack the slick, curvaceous modern looks of some models, but this sharply chiselled, handsome machine has it where it matters. A single, potent boiler heats up within 45 seconds to make great espresso and also provides a jet of steam that makes some more expensive rivals feel a tad anaemic by comparison. 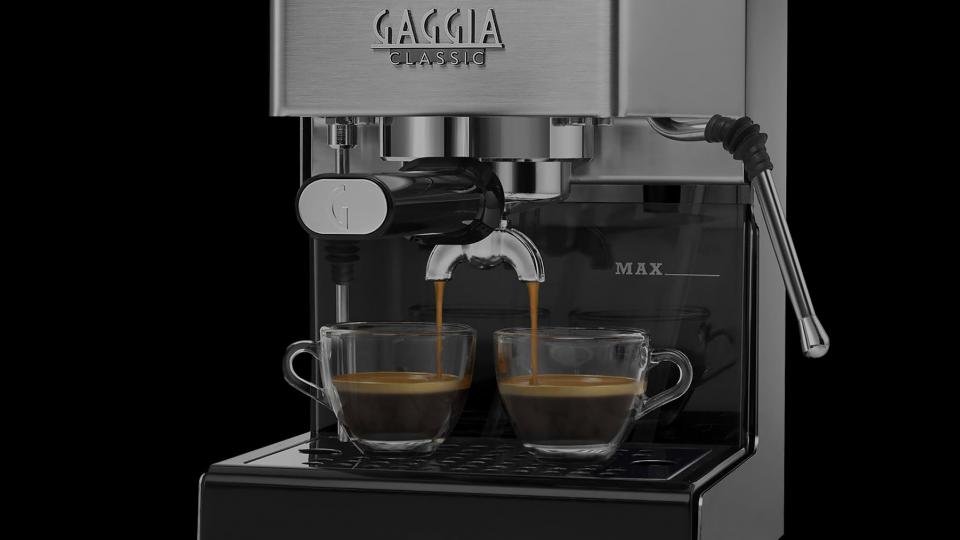 There’s no clever PID temperature regulation or volumetric jiggery-pokery here, though, so getting perfectly consistent results can take a little practise.

Put the effort in, though, and the professional-size 58mm portafilter and potent boiler are capable of eking out an immense depth of flavour from the finest espresso blends. And, yes, it also serves up a jug of finely steamed milk with a creamy microfoam – as ever, with a little bit of effort and skill on your part.

Pull the Classic from its packaging, and it’s immediately clear that this is an entirely different beast to most affordable espresso machines on the market. Set against its modern rivals, the Classic’s brushed stainless steel exterior, reassuringly weighty chromed brass portafilter and clunk-click buttons make it both look and feel more like a semi-professional machine than a consumer model.

The build quality does feel rather agricultural, though. The all-metal body is reassuringly tough and unfussy – far more so than the many plasticky coffee machines on the market – but it isn’t the last word in refinement. The top metal plate doesn’t quite fit flush with the surrounding panels, and the water tank, top dust cover and drip tray lack the snug, millimetre-perfect fit and finish of rivals such as Sage’s family of machines.

The rather workmanlike construction continues throughout. The water tank just loosely slots into place and, when removing and replacing it, you need to take care not to pinch the two rubber hoses that hang down into the water. You’ll also need to take care to remove the exhaust pipe, which sits just in front of the tank. And since the drip tray sits just in front of the water tank, pulling both out is a bit of a faff. 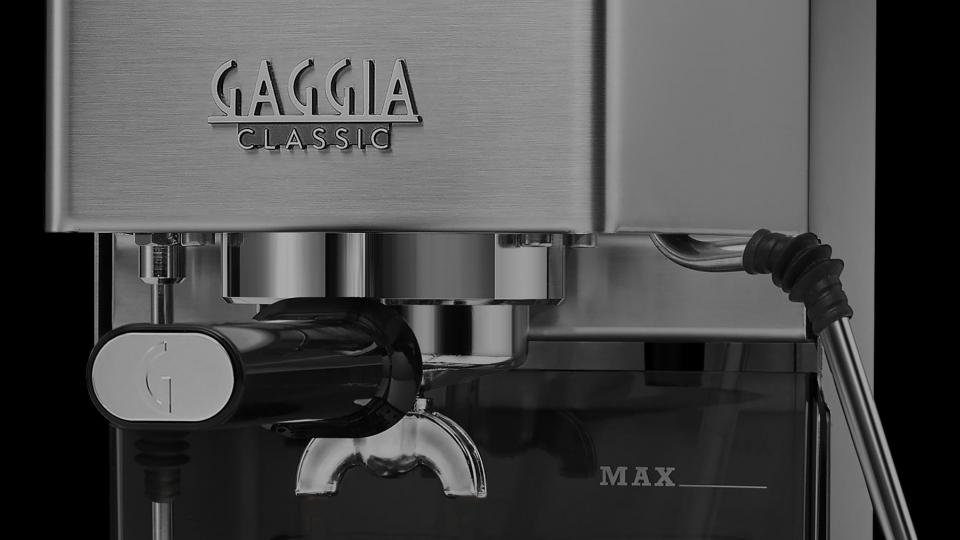 Thankfully, that’s not something you’ll need to do too often: once everything is installed, you can top up the tank by pouring water through the spout in the Classic’s top panel.

You don’t get much in the way of accessories but the essentials are present and correct. You get a single pressurised basket, which is ideal for brewing pre-ground supermarket coffee (and is also compatible with ESE coffee pods), but Gaggia has now added a pair of unpressurised baskets for both single and double shots. If you’re using top-quality coffee, these make all the difference.

You do get a very basic plastic tamper, too, but this doesn’t fit the 58mm baskets snugly – it’s necessary to move it around the edge of the basket pressing down as you go. It works at a pinch, but buying a dedicated 58mm tamper is an absolute must in my opinion as it'll give far more consistent results.

The Classic is simplicity itself to use. There are three large buttons on the front – one is the power switch, one is for coffee, and one is for steam – and there’s a plastic dial on the right-hand side for steam delivery.

Press the on button – the leftmost of the three on the front fascia – and it responds with a beautifully crisp, sprung click. Around 45 seconds later, the LED below the coffee button lights up to show the boiler is at the right temperature to start brewing. Press it and hot water is pumped through the portafilter and through your coffee grounds.

There’s no automatic timer, so you have to press the button again to make it stop. There’s also no option to select water temperature; nothing beyond the absolute essentials, in fact. You either brew coffee or you flick the third button (steam) – and wait for the Classic’s boiler to heat up enough to produce steam.

In our testing, the best results came after giving the machine ample time to warm up – something Gaggia’s manual strongly recommends doing. Turn it on, and once ten to 15 minutes has passed, everything from the Classic’s metal chassis to the top plate becomes reassuringly hot to the touch. The top plate acts as a handy cup warmer, and the metal parts of the weighty portafilter get too hot to touch as well. This is a good thing, as you want the water to retain its heat as it passes through the boiler, into the coffee grounds and into your cup.

Once the espresso is poured, it takes another 45 seconds or so to reach the temperature required for steaming milk. The boiler may be small, but the pressure of steam it puts out feels surprisingly powerful. And while that power means it’s a little tougher to get a silky smooth, textured milk at first, it’s actually a bit quicker once you get the hang of it. I found it to be around ten seconds faster than the Sage Barista Pro in my tests, taking around 45 seconds to steam around 160ml of milk – and yes, the results are every bit as good.

The only issue is that the boiler clearly isn’t very big, and it struggles if you try to steam too much milk in one sitting. During my tests, it managed to heat enough milk for two normal-sized cappuccinos before, quite literally, running out of steam.

In any case, the coffee it produces really is superb. I tried everything from supermarket coffee beans to some lovely Ethiopian and Panamanian single-origin coffees from Clifton Coffee and the Classic delivered some astonishingly good results. Side by side with the Sage Barista Pro, the Classic drew out more body and depth of flavour from every coffee – given how good the Pro is, that’s an impressive showing – and it delivered hot, flavourful espresso from the off. In contrast, I needed to crank the Barista Pro up to its higher temperature settings to deliver espresso at a comparable temperature.

Over the several weeks of testing, there was the occasional shot which didn’t seem to unearth the same amount of flavour as previous attempts – and I suspect this could be due to the Classic’s rather high variance in water temperature – but it speaks volumes that it still became my go-to machine for the duration of its stay.

The Gaggia Classic lives up to its name. It might lack the modern design and fit-and-finish niceties of some rivals but forget bells and whistles, this is a machine designed to simply make good coffee.

And by any estimation, the Classic is a highly affordable step into the world of “proper” manual espresso machines. If you want to upgrade your morning coffee in the office without spending a small fortune, then there really is no better place to start than here.