Salter’s EK2819 XL Digital Hot Air Fryer lets you cook meals with little to no oil for a healthier end result. From homemade chips and wedges to chicken, fish and veggies, there’s not much it can’t cook.

Ditching triple-cooked chips in favour of air-fried potatoes might not sound like a tantalising swap, but with an air fryer you’ll be ingesting up to 80% less fat than standard deep frying. When you look at it like that, making the switch doesn’t seem so bad. 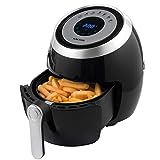 Like all air fryers, Salter’s XL Digital Hot Air Fryer uses a convection mechanism to circulate hot air around the cooking compartment, with the end result being browned and crispy food without the need for deep frying. It’s important to note, however, that an air fryer doesn’t actually fry food, it’s just a small electric appliance with a heating element - essentially a mini oven. 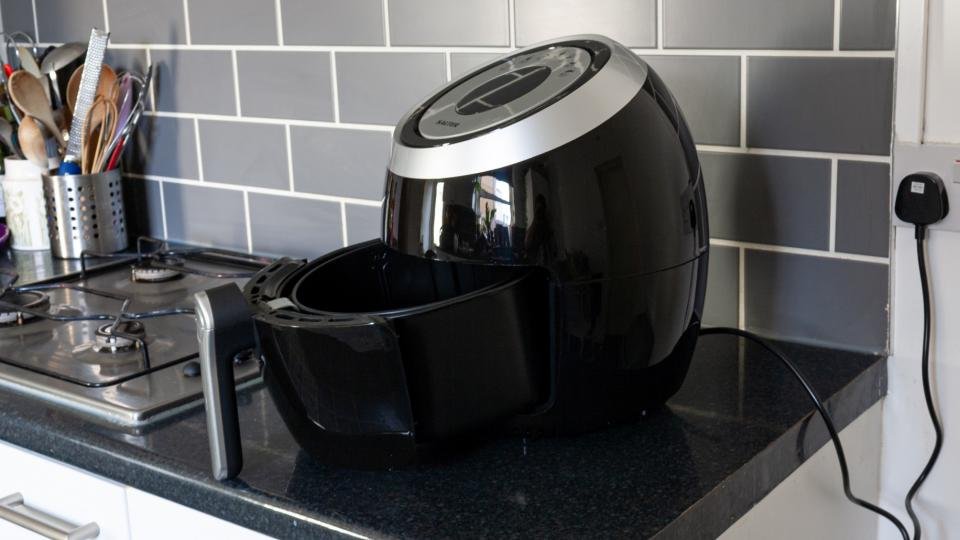 Out of the box, it looks like most digital air fryers. There’s a touchscreen display on the top where you’ll find the power buttons and preset modes for cooking a variety of foods including chips, prawns, chicken and cake. You can also control the temperature and cooking time from here.

There’s a pull-out basket comprising a 4.5l inner cooking basket and outer drip tray, which can comfortably cook up to 800g of homemade chips and 700g of frozen chips. The inner basket can be detached from the outer drip chamber for easy cleaning, and both are dishwasher safe. In the box, you’ll find a manual with general setup instructions and this also includes recipes and step-by-step instructions on how to cook popular dishes such as homemade chips and chicken goujons. 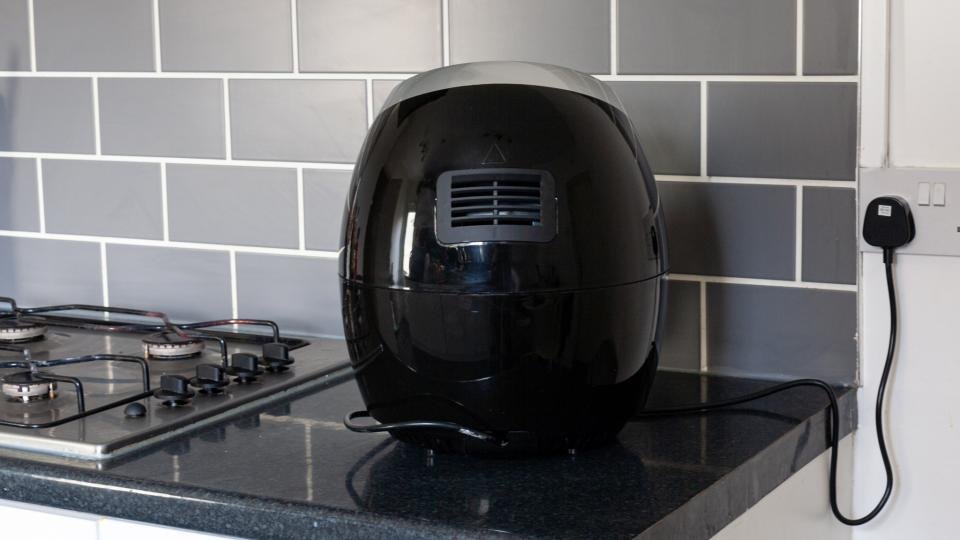 There’s no self-stirring function but it has a larger capacity for chips than the Salter, making it better suited to families, and it also comes with a dehydrate function.

Despite its low price, the Salter XL Hot Air Fryer is as aesthetically pleasing as many of its pricier rivals. Measuring 30.2x35.8x35.4cm (WDH), it has a large worktop footprint, but if you have the space, its sleek, glossy design means you won’t mind keeping it out on display. Fortunately, it’s also relatively lightweight, so it’s not too much effort to move it to and from your workspace.

The digital touchscreen makes up most of the top of the machine and when you plug it in, you’ll be prompted to tap the power-on icon before this is activated. On the main screen, the air fryer automatically selects a default temperature and a time but there are on-screen options to customise both. There’s also an ‘M’ button which you can tap to flick between the pre-set cooking modes displayed above. If you’re not sure what temperature to start with, the included booklet has some handy tips to help you manually adjust the temperature. 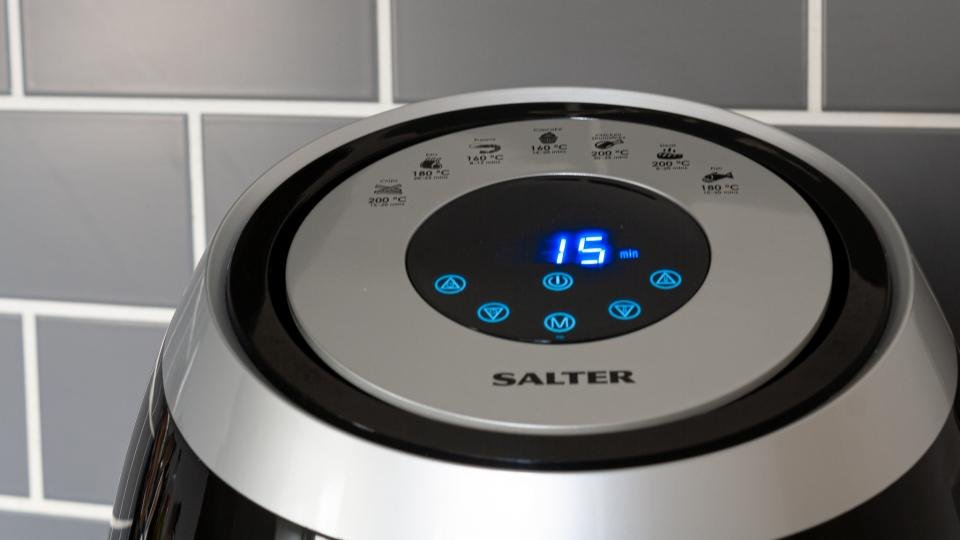 Because there’s no self-stirring function in the main cooking chamber, you’ll need to shake the contents occasionally to ensure even browning. A self-stirring wand is a frustrating thing to go without but for the price, you can't expect heaps of high-end features.Performance

Salter recommends that when cooking chips, you should parboil them for three minutes for the best results and the air fryer also needs to be preheated for three to five minutes before cooking. This is a bit of a pain but it’s important to remember that air fryers primarily aim to reduce the fat content in your food rather than offering sheer convenience – no one said being healthy is easy.

The first batch of handmade chips was designed to push the air fryer to its 800g limit. Following the instructions in the booklet, I parboiled the chips (with skin on) for three minutes, patted them dry and tossed them in one teaspoon of oil. For the XL Digital Hot Air Fryer, it’s recommended that you turn and shake your chips every six minutes to ensure an even crispness. At 200°C, leaving a full six minutes between shakes was a little too long and the chips were browning too quickly. 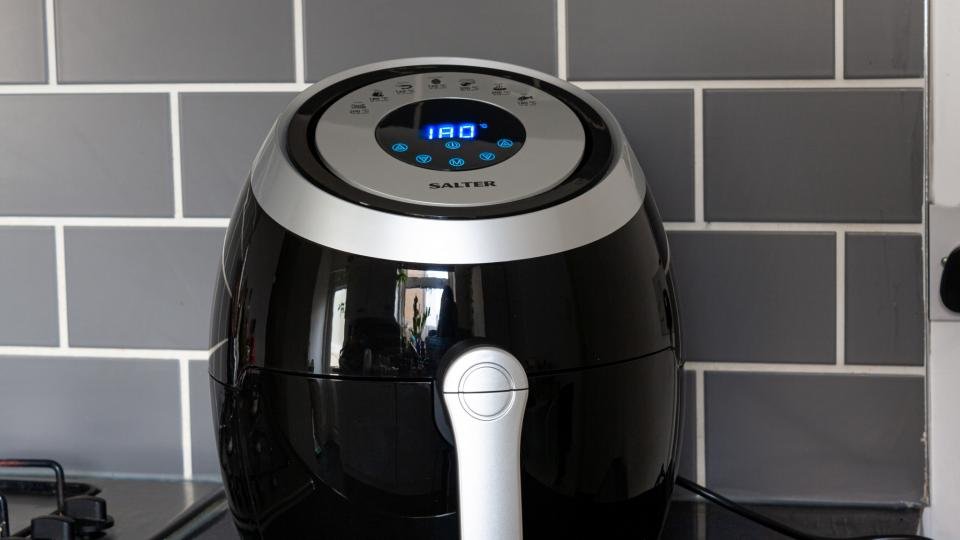 By the end of the 25 minute cooking time, the chips were very browned but not burnt and well cooked throughout. There weren’t any that looked undercooked and all had an even colour. Chips are, however, a very personal thing and for some, these chips would be a little too brown.

The chips definitely didn’t look the same as they would coming out of a deep fat fryer: they were far browner than any chips I have deep fried in the past. You also don’t get that sharp, oily crunch you get from frying but they were grease-free and crispy enough considering how little oil was used. 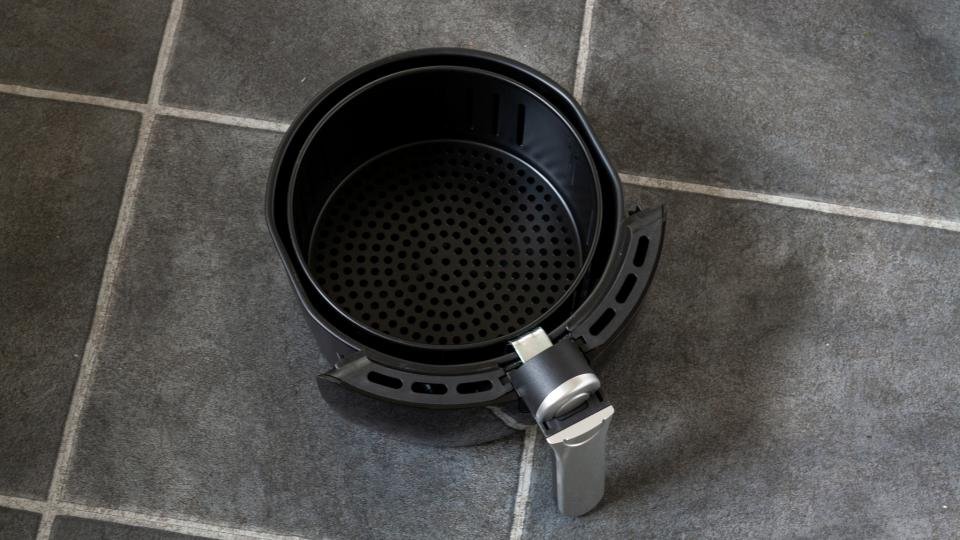 For the second batch, the temperature was kept the same but the quantity was reduced to 500g and the cooking time adjusted appropriately. After approximately 16 minutes, the chips were practically identical to the first batch, indicating a good level of consistency during the cooking process.

The third 500g batch was air fried for 45 minutes at 160°C, after which the chips looked largely the same as the previous two batches. I suspect with a little more tweaking, you could achieve a lighter colour on the chips, but this would require a much lower temperature and longer cooking time.

The Salter XL Hot Air Fryer looks the part and although it doesn't have any special features such as a self-stirring arm, it’s very difficult to find too much fault with it when you consider its low price.

Crucially, it does a decent job of cooking chips. There were no inconsistencies, with every chip being cooked all the way through and a nice, even colour on the outside. It definitely isn’t the same as deep frying but if your main concern is cutting down on fat, this is a reliable air fryer that’s cheap as chips.