Although the Roku TV OS has made its way onto TVs from other brands like TCL in the US, Hisense has exclusive claim to the smart platform in the UK – for now, at least.

Is there more to the Roku TV than marketing hype, then? Thankfully, the answer is yes. The intuitive Roku TV OS is a brilliant and intuitive new platform, and it’s also a gateway to an impressive range of free and paid streaming services. Meanwhile, the TV itself is surprisingly competent considering its price. Could it be the best budget TV for 4K HDR playback? Keep reading to find out.

Streaming coverage is excellent thanks to the Roku TV smart platform, though High Dynamic Range support is limited to just two formats, HDR10 and the BBC’s Hybrid-Log Gamma. While this may come as a disappointment to HDR obsessives, it’s hardly surprising that Dolby Vision and HDR10+ don’t get a look-in at this price. Indeed, you’ll be hard pressed to find a 50in 4K HDR-enabled television any cheaper than this. 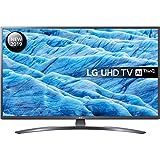 The cheap plastic chassis of the Hisense B7120 Roku TV isn’t exactly inspiring, but at least the TV is relatively lightweight at 9.3kg, making it nice and easy to move around. It stands upon two pronged, non-adjustable plastic feet that are located at the left and right edges, and its panel has a fairly chunky profile due to its use of direct LED lighting; edge-lit panels tend to be a lot slimmer. 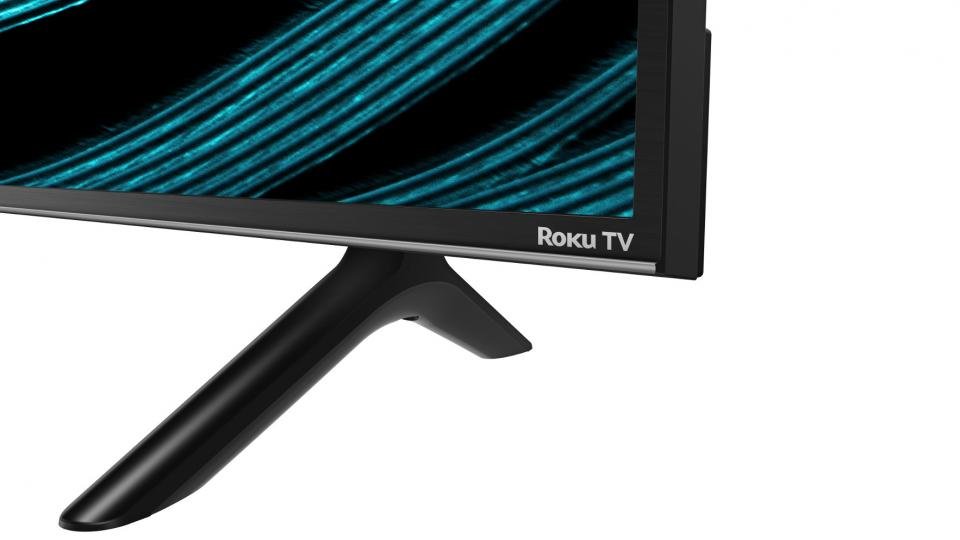 At the panel’s rear you’ll find three HDMI 2.0 inputs along with composite, headphone, optical and AV sockets, plus a lone USB socket. The remote control will look familiar to anyone who’s owned one of Roku’s digital streamers, such as the Roku Premiere: it’s a pleasingly curved, black remote, and its deep purple navigation buttons are distinctly Roku. There are several handy shortcut keys for accessing Netflix, Rakuten TV, Freeview Play, Spotify and Google Play, along with all the standard command and channel searching buttons. 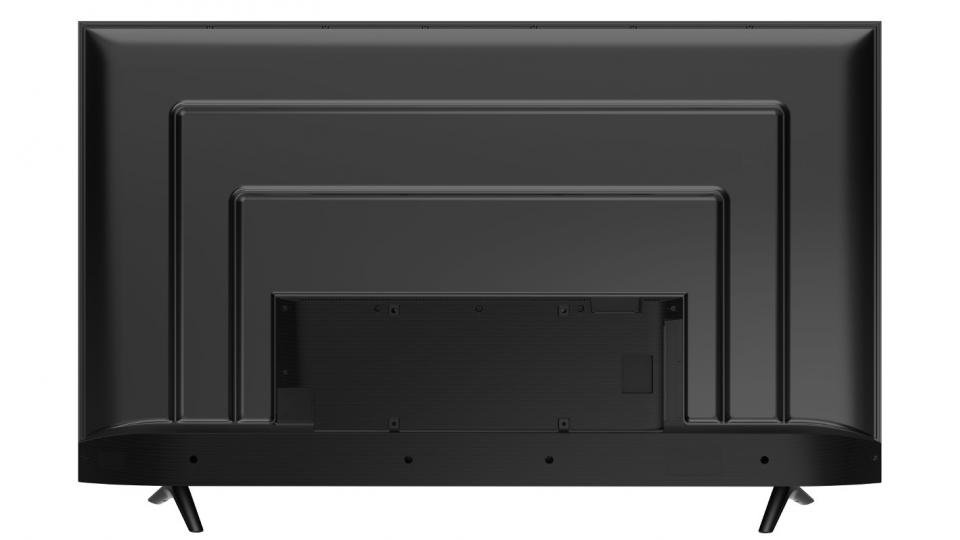 If you do end up buying the Hisense B7120, you may want to invest in a decent soundbar to take over audio duties from the TV’s lacklustre speaker system. We wouldn’t call the speakers tinny, but they definitely lack clarity; the bass is unruly and, in default mode, dialogue sounds muddy. Switching over to ‘Speech’ mode brings dialogue forwards while cutting down on background noise, and it’s probably the most useful of the TV’s various audio presets.

Surround sound support covers Dolby Audio (MS12) and DTS Studio Sound but doesn’t extend to Dolby Atmos. Then again, we doubt that there’s much crossover between people interested in this TV and those with Dolby Atmos-capable sound systems. 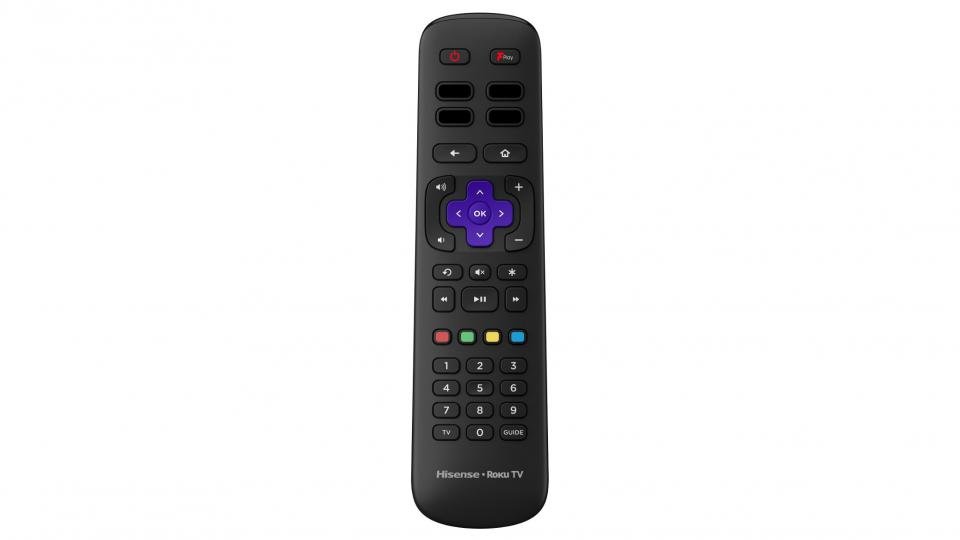 Gamers will be pleased to know that input lag is an incredibly low 16ms with ‘Game’ mode engaged, down from around 37ms when all of the TV's picture processing features are running as normal. That’s great news for fans of competitive, reflex-based games, but don’t forget that you’ll need to activate the feature manually as the TV does not have Auto-Low Latency Mode support.Roku TV smart platform

Given that the Roku TV OS has been making waves in the US since 2014, it's somewhat surprising that it took so long for the innovative smart TV platform to arrive on these shores. Roku claims it to be the only purpose-built TV operating system that's been designed from scratch for TV viewers, content producers and TV manufacturers. We can certainly see the benefits of this approach on the Hisense B7120 Roku TV.

It has an easy-to-understand, responsive home screen that puts all your entertainment sources – be they streaming, broadcast or personal media – on the same level, and it plays host to what’s arguably the most comprehensive selection of VoD services in the UK. All the big hitters are here, including Netflix, Amazon Prime Video, Now TV, Apple TV+, Rakuten TV, and YouTube. Through the Freeview Play catch-up app you’ll find BBC iPlayer, ITV Hub, All 4, My 5 and UKTV Play 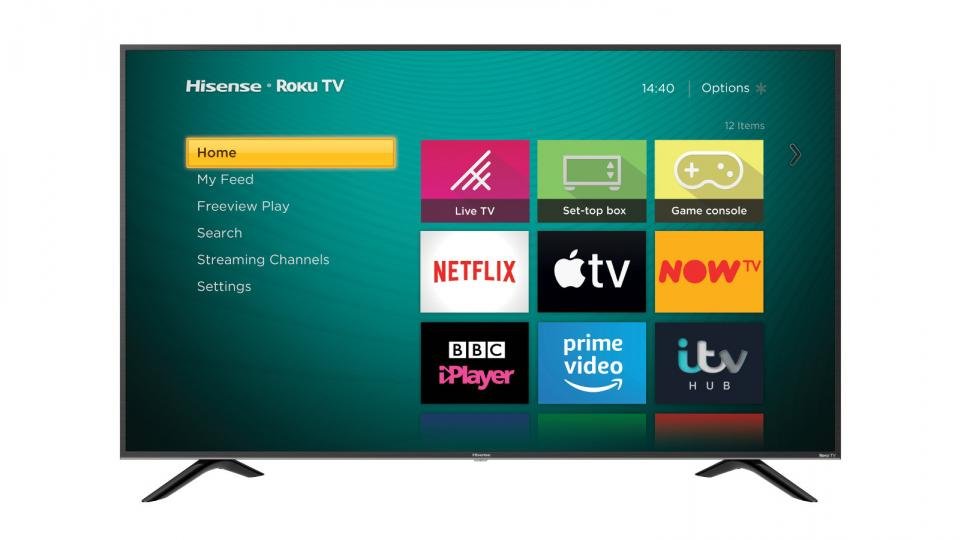 Going from streaming to gaming couldn’t be easier either, as Roku TV provides dedicated tabs for consoles. Simply click on ‘Xbox’ from the home screen and away you go, no source skipping necessary. Of course, the layout of the home page can be arranged to your liking, helping you to launch into your preferred services as quickly as possible. Roku also has an accompanying mobile app that serves both as remote control and hub for fiddling with some of the TV’s more advanced settings.

Roku promises that its frequent software updates will enhance the streaming experience further: the company says it issues two major updates annually, and even TVs released way back in 2014 receive them. This suggests that your new Roku TV will stay up to date – at least from a software perspective – for many years to come.

The only slight downside of the Roku TV OS is that, if you’ve never used Roku before, you'll need to create a Roku account and activate the TV online before you can watch anything, Annoying, yes, but it’s a fairly painless one-off process that unlocks one of the best smart TV experiences around.

The B7120 has a VA-type LCD LED panel that’s able to achieve a deeper black level than an IPS equivalent. As always, though, it’s a trade-off between the superior contrast of VA panels and the wider viewing angles of IPS technology. Hisense claims the panel has a 176-degree angle of visibility; technically, the picture can still be seen from extreme angles, but only at great cost to brightness and colour vibrancy. While you can still enjoy the TV when viewing it from an angle, you’ll get the best image quality when you’re directly in front of it.

There are no local dimming zones within the panel, so it’s unable to enhance contrast beyond its native capabilities within specific areas, though admittedly that’s more of an issue when it comes to High Dynamic Range content. For 4K SDR playback the contrast level is more than adequate. In fact, given the rock-bottom price of the set, we think it looks excellent.

What about non-4K content? Video upscaling on the Hisense B7120 is pretty average looking. Anyone would immediately be able to spot the difference between upscaled HD playback versus 4K native video on this display – it lacks the sharpness we’re used to seeing from mid-range and high-end 4K TVs that have superior upscaling capabilities. We didn’t spot any nasty ringing with upscaled video but there was a bit of fine shimmering from time to time when displaying interlaced SD material.

For the most colour-accurate experience, it’s best to set the TV to ‘Movie’ mode, although it does bathe the entire screen with a faint tint of green. Professional calibration would be the ideal solution to the problem, but who’s going to bother for a £349 TV? It is worth digging into some of the more advanced picture settings, which Roku has annoyingly buried inside the Roku TV mobile app. As a starting point, anyone who owns this TV should disable the noise reduction feature (enabled by default) which scrubs away fine detail and film grain.

Motion handling on the B7120 could be better, as there are no motion-boosting features such as motion interpolation or black frame insertion on board. The VA panel response time is not the fastest either, so some mild smearing does occur when coloured objects move across a lighter background.

We found that 24p content played pretty smoothly, with a minimal amount of noticeable telecine judder, something that’s often an issue on TVs that haven’t got any of the aforementioned motion smoothing features. We did get hit with some intermittent stutter when playing 60Hz content, though thankfully it isn’t that common in PAL regions which broadcast at 50Hz.

It’s time for some bad news. The Hisense B7120’s HDR playback does not impress, and there are a few reasons for this. First off, its peak brightness levels are too low to have any meaningful impact. With a maximum full-screen luminance of only 225nits, it can’t create the dramatic contrast between dark and light that’s characteristic of HDR content. And to even hit that level of brightness, you have to crank the TV’s global brightness setting to its maximum.

Then there’s the issue of colour gamut. The Hisense covers 86% of the DCI-P3 colour space, which is well below what pricier mid-range sets are hitting these days, and not up to the 90% mark required for UHD Premium certification. Therefore, it’s incapable of delivering the vibrant, richly-saturated colours that we’d look for from wide colour gamut content.

Indeed, it’s a bit of a shame that the B7120 doesn’t support HDR10+ or Dolby Vision, even if it’s an understandable omission at the price. HDR formats with dynamic metadata naturally still look their best on top-notch TVs, but they also make the most of the limited range of colours and brightness available on lower-end models.

Although it took a long time to reach our shores, the polished Roku TV smart platform was well worth the wait, delivering an accessible and responsive smart TV experience that anyone can get to grips with. What’s more, it covers the widest selection of streaming services we’ve seen, with every major service present and correct – and quite a few besides. There’s simply no need to shell out on one or more of the various media streamers on the market, and that serves to make the B7120 look like even better value for money.

Hisense and Roku’s first UK collaboration is a huge success. HDR performance is unimpressive, but 4K SDR content looks great and gamers will definitely appreciate the incredibly low input lag. If you’re looking for big-screen thrills on the cheap, the Hisense B7120 is a budget television to be reckoned with.

This article contain Amazon affiliate links, which means we may earn a small commission (at no extra cost to you) if a reader clicks through and makes a purchase.

More in this category: « Eero Mesh Wifi Review: A Pretty Good Mesh System Ring Indoor Cam Review: A great camera for only £49 »
back to top