It’s pretty basic, a camera for those who want something simple to monitor a single room or for anyone who wants to dip their toes in the waters of smart security cameras without having to splash out too much.

What do you get for the money?

There isn’t a huge amount in the small box but then you probably wouldn’t expect there to be for a mere £35. Just the tiny cube-shaped camera and its stubby stand, plus a USB cable and a pair of mains adapters, one for the UK and another for EU sockets.

It’s a pretty cheap-feeling, lightweight thing but it does look neat decked out in white and black plastic and it ticks the boxes when it comes to core features. The resolution of the video footage is 1080p and it’s recorded at a frame rate of 30fps. You get motion detection, day and night video recording, and two-way audio so you can talk through your phone to the person on the other side of the camera. 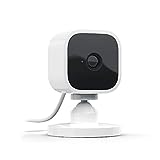 As with most smart home security cameras, you can either view the camera feed live through the Blink smartphone app or put it in motion detection mode. When the Blink Mini detects movement, it then records a short video clip and uploads it to a centralised server where you can review it at your leisure. This service is free initially – until 31 March 2021, in fact – however, once that expires, you have to pay a subscription for the clip storage service.

This isn’t hugely expensive but still a touch disappointing given that the pricier battery-powered Blink XT 2 cameras (£100 each) come with lifetime subscription-free clip storage. 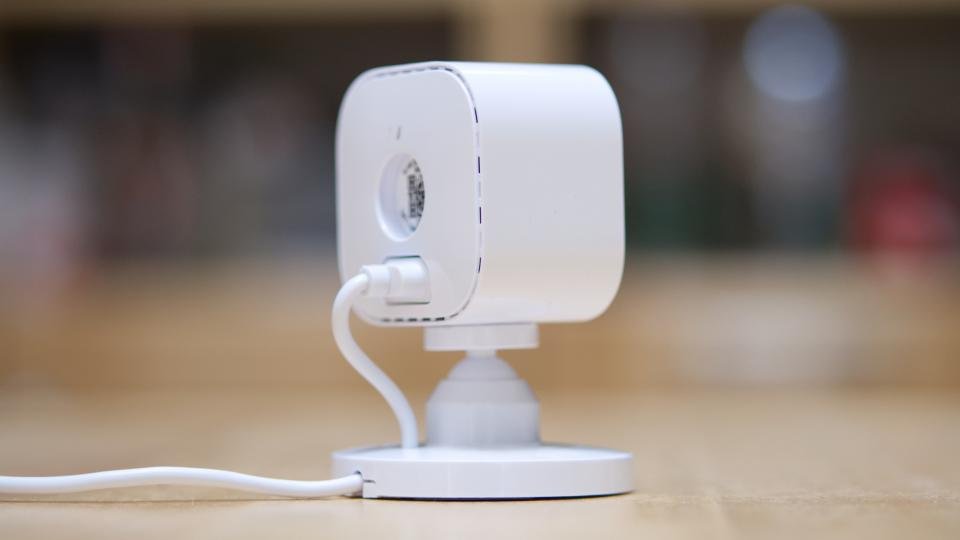 There’s also no way to store video clips on the camera via a microSD slot, although you can pay an extra £50 for the Blink Sync Module 2 if you want that feature.

Is it easy to set up?

The Blink Mini is a doddle to set up. All you have to do is download the Blink app on your phone, set up an account and follow the instructions.

You can choose to leave it at that if you prefer the simple life but there are plenty of options to tinker with as well. You can tweak the sensitivity of the motion detection, adjust the length of the clip that’s recorded between 5 and 30 seconds and tweak the intensity of the infrared illumination LED for night video recordings.

It’s even possible to change the volume of the camera’s internal speaker, which goes surprisingly loud for one so small, and tweak the camera’s “motion zones”. These allow you to, in effect, mask out areas that you don’t want to detect movement in so you don’t get too many motion alerts from curtains flapping in the breeze, for example.

Image quality in daylight and good indoor light is fine but nothing, in particular, to write home about. The one thing that does stand out is its 30fps frame rate, which delivers smoother, less jerky video recording than most security cameras at this price.

The Blink Mini’s night vision video recording is impressive, too. Its single infrared LED provided a stronger, more even illumination than the Yi and it records a clearer image as a result. Audio quality is fine, too, with both the microphone and speaker working to deliver reasonably clear two-way audio.

As for how the camera works, this is effective but limited. While it has motion detection, there’s no face, human or pet detection and also no extra features. The Yi Smart Security Camera, for instance, has both human detection and crying baby detection, so you can use it as a baby monitor in a pinch.

One area in which the Blink Mini works well, however, is its integration with Amazon Echo speakers. Link the Blink Skill with your Amazon account using the Alexa app on your phone and you’ll be able to use your voice to display the live feed from the camera on the screen of your Echo device.

The Blink Mini is an effective, neat and cheap home security camera that works very well. You get free video clip storage until 31 March 2021 and the prices for the subscription after that are pretty reasonable at only £2.50/mth.

It lacks some features that it really should have, notably a microSD card slot so you can free yourself of subscription costs completely, but with impressive video quality and the option of expanding to include local video storage later, it’s a very fine option at this end of the market.

The iPad Pro is slowly but surely becoming the laptop alternative that Apple has always wanted it to be.

The Sony WH-1000XM4 take everything the previous model did so well and improved the all round capabilities even more. ...

Manual espresso machines generally give the best results, but they also require the most effort. At the other end of the...

The new model Galaxy Watch has a slimmer, more lightweight design than its admittedly rather chunky predecessor, along w...